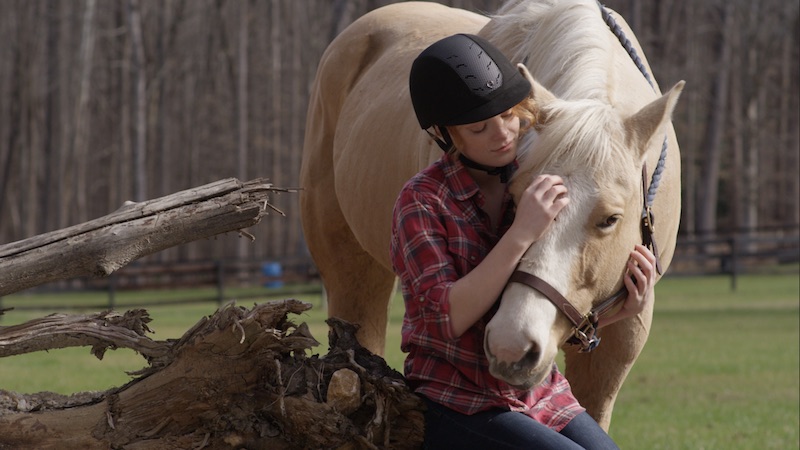 It’s hard to know how many movies Eric Roberts releases in a given year. With most of his contemporary films listed on IMDb as being in production, post-production, or completed, it’s tough to say with any degree of certainty when and where they’ll actually be available to audiences. So you can at least say this about Unbridled: Of all the Roberts films to be released in 2019, this is probably the first. Probably.

After finally escaping the clutches of her abusive stepfather (Roberts), sexual abuse survivor Sarah (Mckay) is enrolled by her counselors in Unbridled, a private program that helps young women overcome trauma by caring for rescued horses. Here Sarah bonds with Dreamer  –  a male horse deemed too skittish to pair with other students  – and works to rebuild her fractured relationship with her mother. However, when Sarah’s stepfather comes looking to reclaim the life he lost, everything Sarah worked to accomplish comes crashing down around her.

Inspired by real-life equine therapy organizations, Unbridled seems to have two different goals. The first is to tell a Lifetime-esque story about evil men and the lives they destroy; the second is to show the audience a faith-based depiction of the recovery process. Unsurprisingly, there are plenty of problems with each. While Roberts completists will no doubt be satisfied with his sleazy performance, the thriller elements seem in bad taste given the severity of the situation. Sarah, a minor, is compelled by her stepfather to have sex with strangers for money; Unbridled chooses not to linger too long on this particular plot point, instead treating it as a generalized form of childhood trauma to get things in motion. The filmmakers aren’t interested in doing the heavy lifting.

Perhaps because of this, much of Unbridled feels at odds with the severity of its subject matter. Sarah is taught at the ranch that her most important virtues are hard work and personal responsibility; the film also focuses on her interpersonal relationships with the other girls and how she learns to fit into a group. These kinds of tropes would be fine in a different film  –  one that takes place in, say, a boarding school  –  but Unbridled hinges its narrative around a very specific form of sexual trauma. Sarah and her peers need and deserve far more than a feel-good story about religion and horses. When your movie depicts riding instructors as the ones also leading group therapy for sex trafficking survivors, maybe it's time to acknowledge this isn't the story for you.