Drama can rarely afford to be as brutal as real life. After all, cinema is a place of escape, of controlled carnage, of real-life misery filtered through the lens of narrative. Yet Capernaum is as close to unfiltered truth as the screen or the audience can handle. Set in the slums of Beirut, it is an eye-opening insight into life at the frayed fringes of a society that seems seconds from unraveling.

Zain (Al Rafeea) knows nothing but this chaos – the word being not just the translated title, but his state of being. Not yet a teen, he is the eldest son of a ne'er-do-well family. Since his shiftless father (Youssef) and bullying mother (Al Haddad) are disinterested in anything like parenting, he does what he must to survive: wrangling his siblings, trying to keep his beloved eldest sister Sahar (Izam) from the perils of puberty, selling juice and Chiclets on the street corner. His life of hard slog and petty crime is balanced only by his incredible compassion, which fate pushes away from his family and onto Rahil (Shiferaw), an undocumented amusement park cleaner who hides her infant son Yonas (Bankole) in a laundry bag while she works multiple jobs.

Capernaum is both pointedly brutal and brutally pointed. Every conceivable misery strikes Zain and all those around him. His anger at this cosmic cruelty is explored when it is revealed that his story is all a flashback, and he is, in fact, in court, suing his parents for the crime of ever having sired him at all. It's an operatic moment that could seem preposterous in such a naturalized setting; but after observing his life, it's hard not to imagine a smart, sensitive, yet street-tough kid like him railing against his very existence.

Is Zain doomed? By the midpoint of his travails, it seems like there is nothing close to a happy end for him that is even conceivable (at least the cramped and disgusting prison in which he is housed means a couple of square meals a day, while juvie is positively idyllic, with actual beds and a TV). That's where Capernaum's grinding honesty almost become too much to bear, as Zain endures and endures and endures, all the while keeping some sense of right and wrong. His urge to be a big brother, whether to Sahar or Yonas, places him on a moral plateau above every adult within earshot – save maybe for Rahil, who at least tries to care.

It's a harsh road, and that harshness can be grinding; so when Zain finally snaps, it's after sins by supposed grownups so disgusting and terrible that lashing out becomes a moral act. Labaki does not relish the discomfort of the audience, but she is so successful in invoking it that it can be hard to endure. It is as if she is challenging us: If Zain has no easy way out, why should we?

Yet there is so much to learn in this wide screen verité world. The actors bring their truths that color every frame: Al Rafeea is a real Syrian migrant (there's a subtle joke about his accent that only really works within that context) who channels his own pains and experiences into a heartwrenching performance, while Ethiopian national Shiferaw was almost deported midshoot. Labaki's extraordinary empathy for the dispossessed and the underdogs, and her compassionate rage at the system that has put them all where they are, evokes both Ken Loach at his most trenchant (think I, Daniel Blake or Cathy Come Home) and Hirokazu Kore-eda (Shoplifters). It's a hard road to travel, yes, but Labaki makes you want to squeeze into Zain's shoes, if just for a couple of hours. 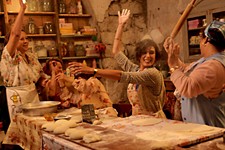 Where Do We Go Now?
This Lebanese film looks at what might happen to the area’s ancient religious conflicts if women ruled the region.