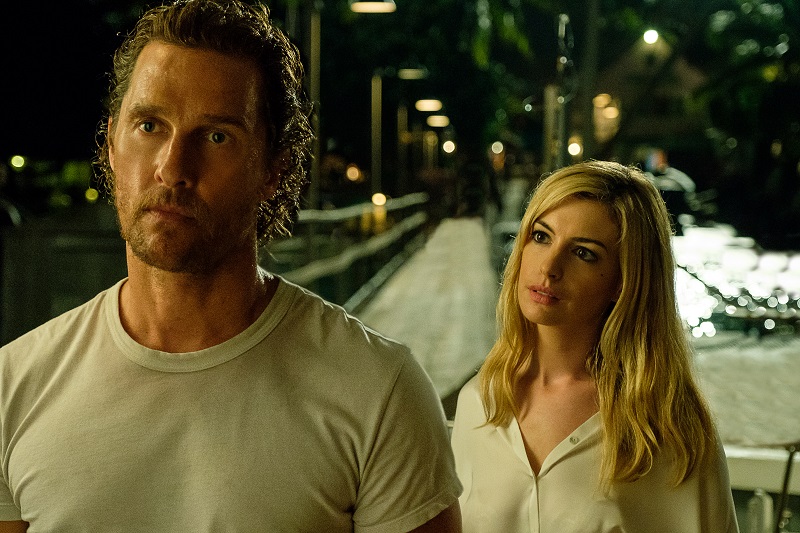 A distinguished screenwriter (Eastern Promises, Dirty Pretty Things) and force in television (Peaky Blinders, Taboo), Steven Knight made a directorial splash with 2014’s Locke, a daringly stripped-down sort-of thriller about one man in a car, trying to prevent his whole world from collapsing into chaos with only the aid of a Bluetooth connection. His latest – a spectacular misfire – is a 180 from Locke’s lean brilliance, overstuffed with plot complications, overheated with bad acting and maudlin sentiment.

Serenity stars Matthew McConaughey as Baker Dill, a down-on-his-luck fisherman who’s been marinating in rum on a remote island for years (decades?). He alternately obsesses over the big tuna he can’t seem to catch and the faraway son he lost touch with once Baker’s childhood sweetheart Karen (Hathaway) married another man, a gangster named Frank (Clarke). Then Karen shows up on the island out of the blue, looking like a knockoff Veronica Lake and posing a very film noir proposition to Baker: Take her shitty, abusive husband out to sea, leave him to the sharks, and cash in on $10 million.

This straightforward-enough first stretch of Serenity isn’t necessarily bad, just boring, with an excruciating amount of time devoted to Dill’s sad, sweaty life, boning a single mom (Lane) for money and stewing over that damn fish. The film criminally strips McConaughey of his most powerful tool as an actor – his charisma. Bluntly, his Dill is just a deeply unpleasant person to be around, which is a problem because he’s in almost every frame of the film. Adding to the unpleasantness is the miscasting of Hathaway, 13 years younger than McConaughey but playing someone who supposedly went to high school with him; their age gap is creepily referenced when she recalls how Dill decided she was “finally old enough” to have sex with him once she turned 16.

Then things get … weird. A psychic connection with Dill’s son is strongly hinted at, all the islanders seem to know something about this supposedly secret plot to knock off Frank, and a bespectacled guy in a suit shows up on a mission to give Dill a sonar fish finder device. Is Dill having a mental breakdown? Has the drinking finally broken his brain? Is he being gaslit? Or is there something supernatural going on? Dill asks himself all these questions, in some pretty terrible monologuing, and eventually the film supplies an answer – one that probably read like solid gold in script form, but onscreen doesn’t make a dent in the impression that this thing is just fatally confused.

Locke
In this bravura movie, Tom Hardy plays a man who tries to mend the unraveling threads of his life while behind the wheel of a car for 85 minutes.