The internet is infinite. So, too, are the ways it can breed creepy behavior and new opportunities to commodify human connection. People’s Republic of Desire explores only a tiny swath of the internet of grossness, but it’s a subject so epic it deserves much longer examining than a quick 95 minutes affords.

Winner of the Grand Jury Award for Documentary Feature at the 2018 South by Southwest Film Festival where it had its world premiere (it airs on PBS’ Independent Lens this February), People’s Republic of Desire presents for Western viewers maybe their first taste of YY, a massively popular social platform in China, and the complex livestreaming ecosystem that’s flourished there. By training a camera on themselves and broadcasting to the web their intimate thoughts (and tears, rants, a pitchy karaoke ballad), regular people – called hosts – can become a hero to the masses or an object of sexual obsession. Fans, many of them struggling to make ends meet, buy virtual gifts on the platform for their favorite hosts – gifts that convert to IRL cash – while members of the upper echelon of society, the “patrons,” funnel much bigger bucks into hosts’ pockets and expect real-life access in return. Upping the stakes: Hosts compete every year in what is essentially a popularity contest deemed important enough to be tracked on the nightly news and is arguably rigged by cash infusions from larger agencies keen to exploit sincere fandom for profit.

Chinese-American filmmaker Hao Wu (The Road to Fame), who also edited and shot the film, zeroes in on single figures whose experiences, one presumes, are representative – a fat-cat patron; a just-scraping-by fan; a former migrant-worker-turned-shock-jock-like host and an inspiration to a working class mostly denied social mobility; and a hostess who is alternately adored and slut-shamed. It’s all a little dizzying, and truly dispiriting. Wu unpacks a heady system and makes sense of it for newbies – the livestream showrooms, the arrows pointing which way the money goes, and the overwhelming noise of it all, dramatized via hyperactive computer graphics (comment bubbles, virtual gifts bought) and audio cues (pinging alerts, laugh tracks). The host’s actual experience as a performer – what it’s like to sit in front of a screen, pitch yourself to an invisible audience, and process that audience’s reaction in real time – feels less tangible. More powerfully evoked is the same depressing conclusion for the winners and losers, the hosts and their fans, the loners seeking a community to which they can never get close enough: That’s it? 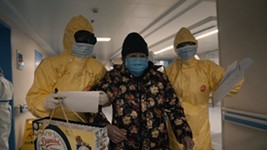