Two women run down a crowded street in Mexico City circa 1970, the camera seamlessly tracking them as they laugh and playfully race to a taqueria. It is Cleo (Aparicio) and Adela (García García), grabbing a bite to eat before going on a date to the cinema with their boyfriends. It is a brief moment of leisure in a life of service for the duo, ever responsible for the care of an upper-middle-class family in dysfunctional turmoil.

Alfonso Cuarón is perhaps best known for a certain type of bravado filmmaking in his career. He took the once staid Harry Potter series to better realms with The Prisoner of Azkaban before embarking on the harrowing and slightly hopeful dystopian cavalcade of Children of Men (sequences of which I still think about), before ending up sending Sandra Bullock floating in space for the Oscar-winning Gravity. That’s just a sampling of his CV, but for his latest film, the autobiographical Roma, the writer/director has cast his gaze on his childhood, but seen through the lens of a working-class maid, one whose emotional impact has an obvious and indelible resonance for the filmmaker.

And Cuarón makes it quite easy to fall in love with Cleo, as she goes about her day, providing meals for the family, doing the laundry, and gently rousing awake the young children in her care. The camera is constantly moving, but in a kind of slow, hypnotic reverie, establishing often dense tableaux of these environments, a world juxtaposed between the carelessly placed items of lives lived and the order of bookcases and immaculate dining rooms. Cleo navigates these spaces with a natural ease, and the film falls into an easy rhythm, even as she cleans up the family dog’s droppings (Borras!) or hastens to pick up a child from school.

But all is not well, as the matriarch Sofía (de Tavira) and her husband Antonio (Grediaga) fight over his infidelities, eventually leading to his departure, and when a tryst with a young martial arts enthusiast leaves Cleo pregnant, this idyllic world that Cuarón has carefully crafted begins to fray. Nothing exemplifies it more than when taken to the hospital to check on her unborn baby, Cleo visits the newborn babies, ensconced in their plastic tubes. All of a sudden, there is an earthquake (a common occurrence in Mexico City), and the lingering image of debris falling over a newborn’s covered bed is striking. And that is just one of many images the filmmaker gives us in this wonderful and at times breathtaking film. From the petty arguments among siblings to the harrowing chaos of student riots, what Cuarón chooses to show and, more importantly, not show? Those choices make all the difference. This is a film that alternatively shows humanity in all its ugly glory as well is its quiet moments of beauty. 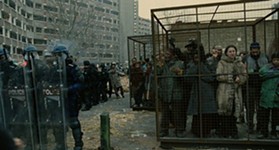