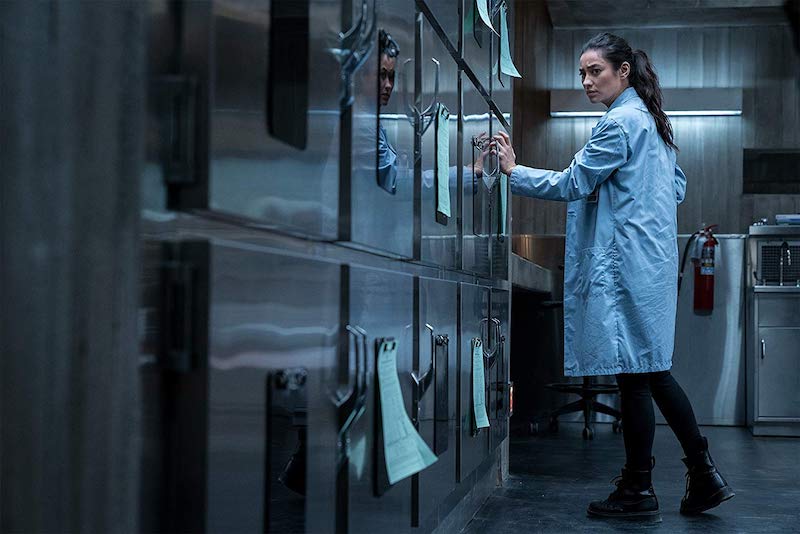 The Possession of Hannah Grace

After her career as a police officer implodes, Megan (Mitchell) takes a job working the graveyard shift  – in every sense of the word  –  at her local hospital. There she hopes to have immediate access to her Alcoholics Anonymous sponsor and nurse Lisa (Stana Katic, of Castle fame) and time for reflection on her struggles. But when the body of a brutally mutilated young girl is delivered to her care, Megan begins to notice strange things happening around her in the mortuary, including a dangerous homeless man who claims that her Jane Doe may not be as dead as she seems.

Given the premise, horror fans will undoubtedly go into Possession hoping for another chamber horror film on par with 2017 sleeper The Autopsy of Jane Doe. They will, I'm afraid, be utterly disappointed. Possession is cobbled together from a dozen different genre tropes, unable  (or unwilling)  to find a voice of its own. What begins with a standard Hollywood exorcism quickly downshifts into a cadre of predictable scares: Megan hearing things in the background, Megan finding things that weren’t there before, Megan seeing things on security footage that shouldn’t be possible. Maybe if the movie hadn’t front-loaded our knowledge of the situation, or made it so Megan barely knows any of the people put in harm’s way, or removed the gothic religious elements from a film about demonic possession, but alas.

The film’s indifference to the horror genre is especially frustrating thanks to its setting. Filmed almost entirely underground, the mortuary feels more like a bunker than the basement of a hospital, and this presents some unique visuals thanks to the motion sensors and long concrete hallways. There are undoubtedly filmmakers who could’ve taken that setting and created something genuinely spooky; it’s a shame to see an excellent setting go entirely to waste.

Few horror films are as frustrating as a studio-backed movie with nothing to say. Be smart. Be weird. Be gross. Be anything, any combination of ideas and execution that justifies your existence. The Possession of Hannah Grace isn’t the kind of bad movie that warrants midnight screenings and rowdy crowds; it’s the kind of bad movie that quietly fades from memory, leaving the world no better and no worse than if it had never existed to begin with.