"There's no such thing as a Hollywood ending," chorus the cast of horror-musical Anna and the Apocalypse, and take that warning to heart. Musicals have often used a good show tune to take the edge off the drama (take out "You'll Never Walk Alone" and Carousel is about an abusive spouse dying in a botched robbery). Yet this delicious, charming and heartbreaking story of growing up at the end of the world is never afraid to throw some innards around.

Shot in gray, grim, suburban Port Glasgow in Scotland, Anna and the Apocalypse is about young hearts burning to be free – right until the undead rip those hearts out of their chests and eat them. Anna (Hunt) is in her last year at high school, and her dad (Benton) isn't in on her plan to put off university for a year and go traveling. Her best friend John (Cumming, one of the best depictions of teen awkwardness since Jon Cryer's Duckie) is working out that his crush on Anna has no future. Meanwhile, she's dealing with her quick fling with school bully and arrogant dudebro Nick (Wiggins), and that's all the emotional complexity your average high school musical needs. And then the zombie apocalypse hits, and the story gets dark and sorrowful and soulful really fast.

Anna was originally pitched as High School Musical meets Shaun of the Dead, and against all odds it pulls those two seemingly antithetical ingredients together with snap and scares. Hunt is stellar as the backbone of the survivors, giving everyone – Leveaux and Siu as goofy lovers Chris and Lisa, and especially Swire as ultimate outsider Steph – a chance to shine and have their truly heartfelt moments. At the same time, veteran British comedian Paul Kaye brings exquisite pantomime menace as Savage, the future headmaster and the ultimate British villain – a petty bureaucratic jobsworth with a vindictive streak.

A key component of Anna's undeniable charm is that, first and foremost, it works as a horror film. The script by Alan McDonald and the late Ryan McHenry is fearless about the beats of the zombie genre, and that means losing characters that you'll likely have fallen in love with. Then they add a sparkling, fun, teen comedy layer over that, filled with moments that make these small-town kids feel authentic. And before anyone worries about dialect (for some unknowable reason, even Disney in the age of diversity thinks it's OK to mock Scottish accents – looking at you Ralph Breaks the Internet), Anna is one of the few recent musicals were no one swallows half their lines. Plus, in a glorious moment for Lowland Scots, rhyming "isnae" with "Disney" is a perfect, if inadvertent, riposte.

And what of the score? The eminently sing-along, stomp-along pop songs by Roddy Hart and Tommy Reilly swerve from the ridiculous ("The Fish Wrap") to the delightfully sinful ("It's That Time of Year") to the suitably schmaltzy ("Human Voice"). But the signature refrain of "Hollywood Ending," with its high-kicking energy and table-punching emotion, is just irresistible. It's the sweet that balances out the bitter of a film that makes it clear that this won't all end well. Anna and the Apocalypse is like biting into a candy cane and getting jabbed by those sharp, sugary shards. 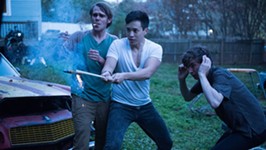