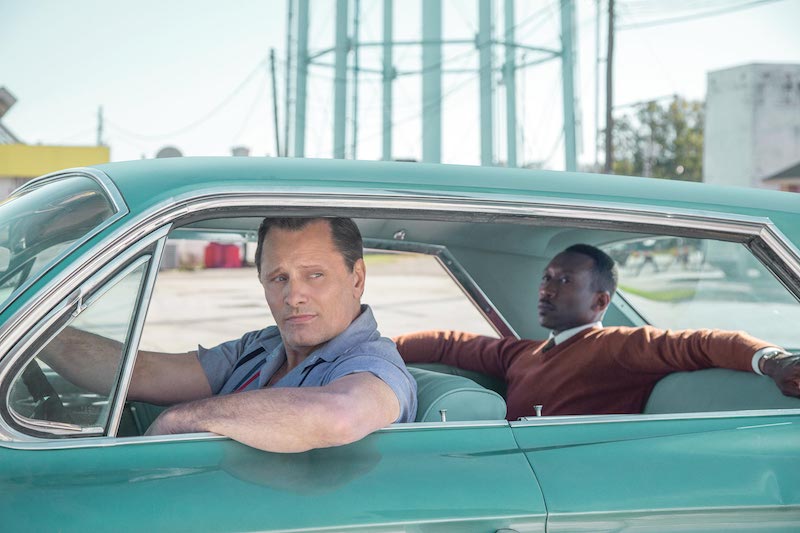 Two terrific performances and the interplay between the two actors – Mahershala Ali and Viggo Mortensen – are the reasons to see Green Book. Their pas de deux is a master class in acting, and the twosome’s give and take provides good company for the road trip that comprises the heart of this narrative. So rich are their performances that their display helps to detract from the film’s predictability and easy resolution of ingrained prejudice.

Green Book (the title coming from the “Negro Motorists Guide” which listed places that would rent to people of color who were on the road) is a historic piece set in 1962, and is based on the experiences of the classically trained pianist Dr. Don Shirley (Ali), who is touring his professional trio through the Deep South and being driven from gig to gig by temporarily laid-off Copacabana bouncer Tony Vallelonga (Mortensen). Don is a cultured artiste and Tony is a prejudiced goombah, whose practical needs (Don for protection and Tony for extra income) and natural antipathy turns to mutual admiration and friendship over the course of their journey. There are kernels of truth in their dramatic arcs in which social and racial prejudices are erased by active proximity. However, more than seeming like a reversely cast Driving Dr. Shirley, Green Book is more likely to remind the viewer of an Odd Couple reunion. Don and Tony bicker like a persnickety Felix and earthy Oscar.

Green Book is directed by Peter Farrelly, and co-written with him by Brian Hayes Currie and Nick Vallelonga, whose tales about his father’s time driving for Don Shirley forms the basis of this film. This film might seem like a stretch for those who only associate Farrelly’s name with raunchy films like There’s Something About Mary and Dumb and Dumber. Yet pay close attention to the films Farrelly’s not only written, directed, and produced (usually with his brother Bobby) and you’ll find a soft, mushy center full of love for its defenseless and unfairly abused characters, whether they are mentally challenged ( … Mary, The Ringer), overweight (Shallow Hal), a conjoined twin (Stuck on You), or dimwits (Dumb and Dumber, The Three Stooges). Few of his plots could fully play out in the real world, thus Green Book’s historical specificity is unusual. If prejudice were as easy to resolve as in this movie’s 1962 example, its presence would be virtually unknown in our present day. Still, movies can also exist to inspire and offer prototypes for the future, even if their basic tenets exceed the currently possible. The film’s appeal to audiences is demonstrated by its win of the Grolsch People’s Choice Award at September’s Toronto International Film Festival. Additionally, time passes quickly in this rearview road trip in which the marvelous interaction between Ali and Mortensen provides the forward locomotion.