”For better or worse, in sickness and in health ….” Vows uttered at the rosy start of a marriage can take on different shadings during a union’s later years. Sometimes sound bodies and minds have ways of deteriorating over time, and the onset of a debilitating illness can test a couple’s commitment. What’s better and what’s worse may no longer be the same thing for each partner. Toss in grown children, friends, and other family members, and the entity’s needs grow exponentially. What They Had zooms in on one Chicago family whose commitments to one another become frayed when the matriarch is overtaken by Alzheimer’s disease.

What They Had has a lived-in ring of truth that will be instantly recognizable to any caregiver, spouse, child, or other loved one who has experienced something of this sort. The film’s top-notch cast creates characters who easily augment the film’s veracity, and the apartment in which most of the film’s activity occurs exudes a sense of the familiarity and comforts that have cocooned the family for many decades. First-time writer and director Elizabeth Chomko has built her script (an Academy Nicholls Fellowship winner) from personal experience. And though that makes many of the story’s details seem honest and precise, Chomko’s film, nevertheless, offers very few insights or believable answers.

The movie’s precipitating crisis occurs in the opening sequence as Ruth (Danner, achingly delightful) rises from bed, predawn, and ventures out into the lightly falling snow, leaving behind only her footprints as a clue to her departure. We learn later that she suffers from Alzheimer’s and the condition is worsening, although her devoted husband Burt (Foster) won’t relinquish her care to others, much to the detriment of his own health. A good Catholic who takes his marriage vows seriously, he dresses her, colors her hair, and does her nails, all the while blusteringly denying the true depth of Ruth’s mental decay. Daughter Bridget (Swank), a Los Angeles chef with her own marital woes, swoops into Chicago with her teenage daughter Emma (Farmiga). Nicky (Shannon, rarely better) is the sibling who stayed in Chicago and bears the brunt of caring for his parents, and his stamina is wearing thin. Several more family subplots surface and threaten to turn this sensitive yet funny drama into predictable soap opera territory. (The film’s goopy closing images should be burned on the altar of Impossibly Happy Movie Endings.) Too many characters, who all have problems that need solving, stretch the limits of the story and push it beyond its comfort zone. Nevertheless, when the family dynamics are going strong, What They Had is an ensemble piece that hits the bull's-eye. 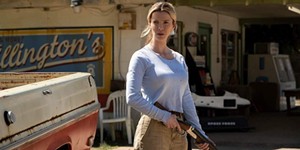