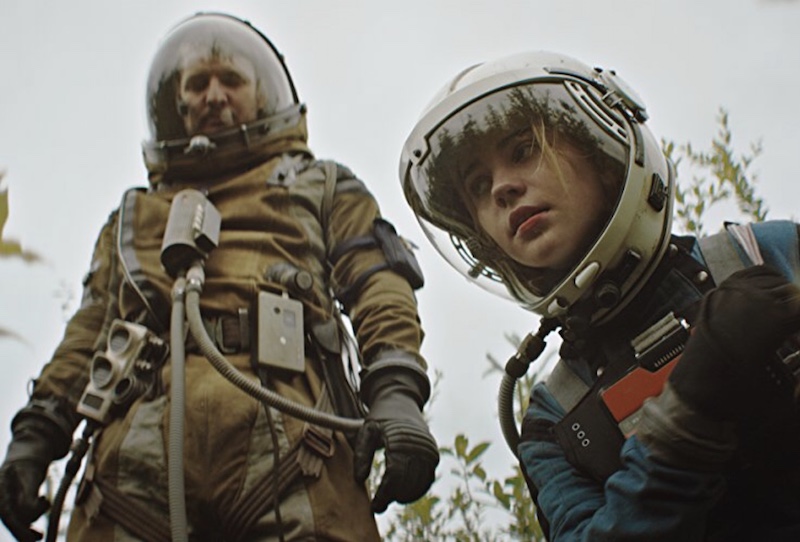 Given the parallels between space exploration and westward expansion, it shouldn’t come as a surprise that plenty of science-fiction films borrow heavily from the American Western. Few do it so blatantly  – or so well  –  as Prospect, an impressive debut feature from the filmmaking team of Caldwell and Earl that returns to Austin after an award-winning run at SXSW earlier this year.

Cee (Thatcher) and her father Damon (Duplass) travel between the planets on the fringe of the galaxy, harvesting rare crystals from local toxic life forms to pay off their family’s debt. When Damon is contacted by a band of mercenaries with the location of a sizable deposit on a remote moon, both father and daughter believe they finally have a chance at a normal life  – until Ezra (Pascal), a stranded mercenary, decides that their get-rich-quick scheme still has plenty of room for a third party with a gun.

With any luck, the same audiences that turned Duncan Jones’ Moon into a science-fiction staple will latch on to the low-budget brilliance of this film (the first from indie darlings Gunpowder & Sky's new sci-fi label Dust). Much like Moon, Prospect views the future through the lens of the past; its corporatized vision of space exploration is a direct rebuke to the utopian societies often seen onscreen. This retrofuturism even extends to production design, which favors Seventies-era computer walls and projectile weapons over the glossy technology of a Star Trek episode. For those drawn to a lo-fi vision of space exploration, Prospect is undoubtedly one of the year’s must-see movies.

And then there’s the cast. Those familiar with his work in Game of Thrones and Narcos know how easily Pascal can steal a scene, and in Ezra the actor has found perhaps his most dynamic role. This is a character that wouldn’t seem out of place in an episode of Deadwood; part gunslinger and part high plains poet, Ezra offers Pascal a chance to dial his trademark charisma up to new heights. Credit also goes to newcomer Thatcher  as a young woman who was never afforded the luxury of a childhood. The slow trust that forms between these two characters is one of the things the film gets absolutely right.

Clever, dynamic, and full of little touches of world-building that will drive science-fiction fans wild, Prospect is destined to land on every list of underrated genre films for years to come, long after it has ceased being any semblance of underrated. Stay one step ahead of the curve and see it in theatres this weekend.