American literature’s favorite green-furred misanthrope has been revived yet again for the screen. Was anyone clamoring for this? I suppose if this new animated adaptation can knock the Ron Howard/Jim Carrey live-action abomination of 2000 out of holiday-viewing heavy rotation, then it was worth it. Still: In The Grinch power rankings, this one trails Theodor Geisel’s original 1957 storybook and Chuck Jones’ cheeky 1966 TV special by a long mile.

Illumination Entertainment has a solid track record of producing pretty good kiddo entertainments sweetened with witty asides to their parents – the Despicable Me pictures, The Secret Life of Pets – but The Grinch is, emphatically, a children’s movie. And that’s okay. Kids will love the physical comedy and the zoomy direction, slaloming up and down Whoville’s wintry slopes. (I didn’t see the film in IMAX, but I could see the filmmakers’ framing for it in the first-person perspective of vertiginous drops and hairpin turns.) And the film’s super-emotive, four-legged supporting parts – the Grinch’s devoted dog Max; a sweet, lardy reindeer named Fred – are kid-catnip, for sure. They’re a real treat, and far more effective at (nonverbally!) communicating the film’s emotional message than the late run of on-the-nose, over-earnest monologues.

Subtlety is not The Grinch’s forte, nor is brevity, and the filmmakers further sodden the plot’s momentum by pausing to explain the origins behind the Grinch’s pre-existing condition (a heart two sizes too small, side effects include an intense loathing of all things Christmas). This Grinch suffers from something like PTSD following a rotten childhood, which is a lot less fun than him just being a cranky bastard. And while there’s no quibbling with the comedic timing and inflections of Benedict Cumberbatch’s voicework as the Grinch, I wish he hadn’t sanded down his British accent, so deliciously withering, into an American one, flatter and more benign, in step with a larger campaign to soften the Grinch up well before his come-to-Jesus moment when he embraces the Christmas spirit. To be clear, there’s no actual God talk here, only generic complaints about consumerism, and a season’s usual greetings soundtrack that spans Christian classics (“God Rest Ye Merry, Gentlemen”), secular standards (Nat King Cole silkily roasting those chestnuts on an open fire), and Tyler, the Creator’s spin on “You’re a Mean One, Mr. Grinch.” The new track is fine, if impersonal, overproduced – a good match for a movie that’s been engineered to achieve adequacy, but not much more. 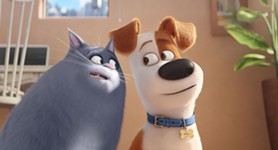