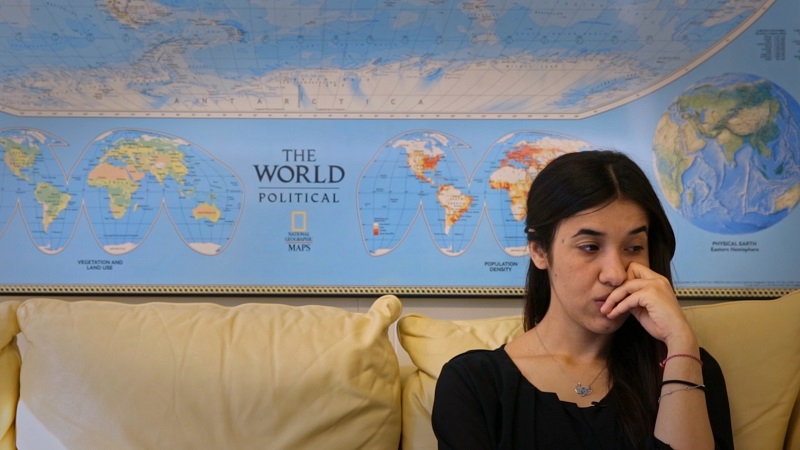 In 2018, the Norwegian Nobel Committee awarded its highest honor to two individuals who have spent their lives fighting to end sexual violence as an act of war. One of these recipients was Sinjar refugee Nadia Murad, and the focus of On Her Shoulders is on her preparations to plead for her people to the General Assembly of the United Nations.

At 24 years old, Murad is a survivor. A member of the Yazidi faith – a pre-Islam religion whose practitioners are frequently the subject of religious violence – Murad was uprooted from her northern Iraq village when ISIS forces invaded and murdered most of her family. From there, Murad was enslaved and subjected to repeated sexual assaults before escaping; in her life as a refugee, she found her voice as an activist who worked tirelessly to raise public awareness for the plight of the Yazidi people.

On Her Shoulders asks us to follow Murad in a hellish loop of interviews and public speaking events on behalf of the Yazidi. We watch as she relives moments of personal trauma in the hope that government officials might legislate on her people'’ behalf. We listen to an endless parade of reporters and politicians as they assure her they understand how painful this whole process must be. And then, with best of intentions, these men and women prod at the worst moments of her life in the hope of crafting a marketable trauma. It would almost be absurd if it weren't so deadly serious.

In an era where women take it upon themselves to relive private pain in the public eye, Murad’s stoicism is striking. Much of the film is depicted in contrast: We hear Murad’s broken voice as she describes her assaults for the hundredth time, but what we see is the aftermath, a woman who emptied herself in the name of awareness and must always find the reserves to fill herself back up. The only moments where Murad seems at ease are when she visits with other Yazidi refugees in Europe. At one point, she admits that she initially rejected counseling on the grounds that suffering was a state of being for many of her brothers and sisters.

On Her Shoulders offers some limited insights into the politics of international refugees, but the film keeps its focus on a woman of humble origins who willingly takes on the pain of millions. Murad may prefer not to see herself as a hero, but a hero is exactly what she has become.

On Her Shoulders, Alexandria Bombach