The adapted screenplay by Nicole Holofcener and Jeff Whitty recounts this true story like a low-key thriller. It’s 1991, and an unemployed Israel – a nasty woman who loves cats and abhors people – is at the end of her rope. With her style of books no longer fashionable (a recent Estée Lauder bio has flopped badly), she’s behind in her rent, can’t pay her vet bill, and only has money to spend on a serious drinking habit. By chance, she finds two typewritten notes signed by vaudevillian Fanny Brice in a library book, and discovers there’s a niche market for the letters of deceased authors and showbiz notables. Soon, Israel is painstakingly forging letters in the style of Noël Coward, Dorothy Parker, and others, selling pieces of counterfeit old-school correspondence good enough to fool some of the people some of the time.

An inspired McCarthy uses her gift for sardonic humor to make Israel’s misanthropy acidly entertaining, while retaining just enough vulnerability to keep the character’s predicament sympathetic. (A scene on the subway in which the terrified writer silently rehearses her first deception with a rare book dealer will have you hoping she succeeds.) As Israel’s dissolute partner in crime, the gay Englishman Jack Hock, Grant is letter perfect in the role of a two-bit scoundrel who’s hit hard times, selling cocaine to make ends meet and living God knows where (although he must be storing that passé Eighties wardrobe somewhere). Grant punctuates almost every piece of Hock’s dialogue with an absurd gesture or facial expression – the theatricality of his portrayal of this not-so-street-smart bullshit artist is fascinating. Together, these two fine actors give performances resembling a team effort, the tenuous relationship and jostling interplay between their lost souls imbuing Can You Ever Forgive Me? with a quality that can’t be faked. 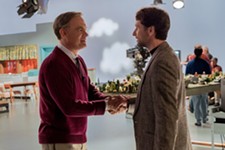 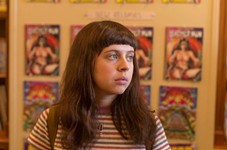