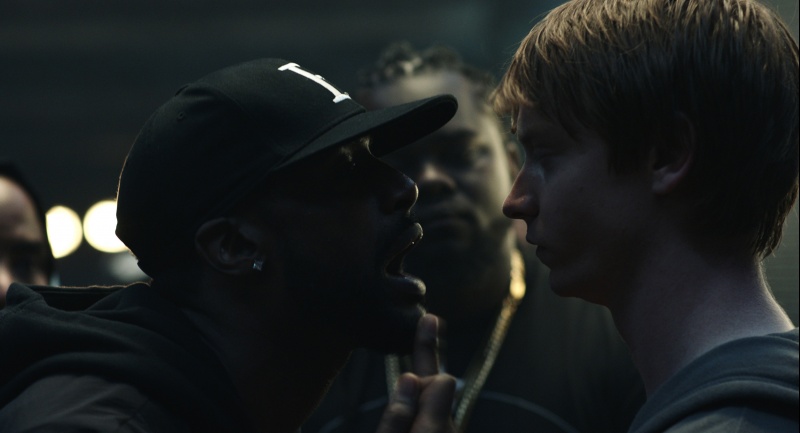 Is Bodied a comedy? It’s wildly laugh-out-loud funny at times, for sure, but this send-up of the world of battle rappers has plenty to say – loquaciously, discursively, “OMG, did they just say that?!”-ly – about the cultural appropriation of traditionally minority art and soul by “hyper-woke” white folk. But, damn, this is one ludicrously humorous, smart-alecky sneak attack on not only hip-hop’s over-the-top machismo and the linguistic contortions of rap itself, but also on the form and content of poetry and language itself. Double bill this with Boots Riley’s similarly super-smart Sorry to Bother You and you’ll either have an aneurysm or the time of your life. Possibly both.

Worthy (American Vandal) is Adam, a grad student doing his thesis on the “varied poetic functions of the N-word in battle rap.” To that end this scrawny, nerdy, wannabe-poet immerses himself – and his eye-rolling girlfriend Maya (Uphold) – in the basement and warehouse world of underground rap battles. No fists of fury here. In lieu of UFC Fight Clubbing, local rhymesters square off and unleash the coarsest, most fluidly vulgar harangues upon each other, friendly-like. Most of the time, that is. Adam’s fish-out-of-water intellectual white boy status changes one evening after another white wannabe rapper (think a less talented Eminem, who serves as a producer here) challenges this straight-out-of-Berkeley college kid to an impromptu parking lot battle. “Oh, I don’t rap,” Adam squeaks, but then something snaps and after a hesitant few lines, he lyrically obliterates the dumbfounded kid. And lo, a newborn battle rapper enters the fray and proceeds to deconstruct the very form itself. “We don’t need Macklemore, we need Mackle-less,” Maya says, but Adam knows nothing cuts to the heart of the matter – be it race, misogyny, #woke – like semi-satirical subversion, especially when it’s skewered by a spited, rapier wit.

So yes, Bodied is a comedy of ill manners, fraught as it is with a veritable encyclopedia of contemporaneous qualms confronted and contested with some seriously dope hustle and flow. Tag this one #badassseriousfun. Torque
Rev your engines: The first bike movie of the year is here.