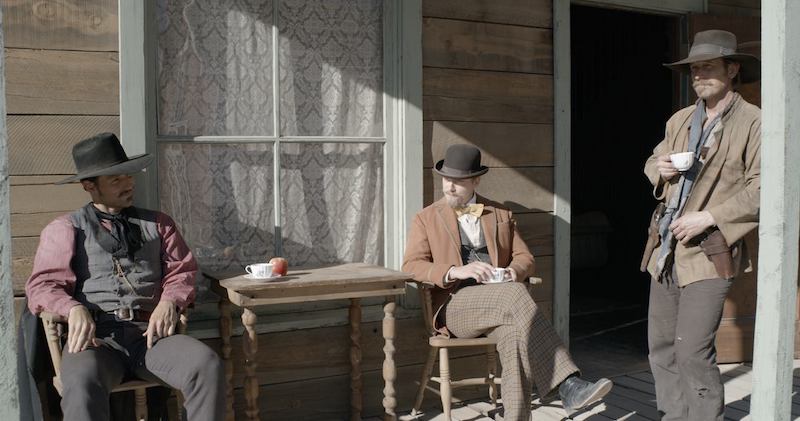 You know Westerns are in the middle of a comeback when even low-budget filmmakers are trying their hand at the genre. Big Kill, the latest such film, may not operate on the same level as a movie like The Sisters Brothers, but there’s certainly a bit of charm in watching a filmmaker play it straight with a few of our favorite Nineties stars.

After being run out of Mexico by the local militia, gunslingers Jake (Martin) and Travis (Hummel) find themselves broke on the Texas border. This changes when they meet Jim (Sanders), an East Coast accountant traveling west to meet his brother in the booming city of Big Kill, Ariz. When the trio arrive, they find themselves in a city caught in the grip of a cruel preacher (Patric) and the notorious outlaw Johnny Kane (Phillips). Despite staring down the barrel of another gunfight, Jake and Travis decide to stick around and help Jim look for his missing brother ... at least until the saloon runs out of whiskey.

Provided that your favorite distribution platform is the nearest Redbox, you’ll probably find this low-budget Western quite to your liking. Big Kill is the feature film equivalent of a one-man production; not only does Scott Martin play Jake, he also wrote, directed, produced, and co-edited the film. This level of involvement often bodes poorly for indie movies, but Martin has managed to pull together what looks and feels like a proper horse opera. Think of Big Kill as the unaired pilot for a Nineties television Western and you might have a general idea of what to expect. It’s more than enough to keep you from tripping over the production design every 10 minutes.

And the performances aren’t half-bad, either. Too often, low-budget productions fall somewhere between movie and marketing stunt, undercutting their original storytelling with shameless bits of recognizable casting. That’s not what Big Kill has in mind for its co-stars. While there is some novelty in seeing actors like Patric and Phillips take hammy villainous turns, they’re given a bit of substance to chew on, and the film is better for it. Martin even gets a solid leading-man turn out of Sanders, whose kindhearted tenderfoot is the focal point of the movie.

If you can accept the fact that Big Kill is a film with some rough edges – how I'd love to give them a mulligan on that terrible soundtrack – then you might just be surprised at how far a good location and a solid cast will get you.

For an interview with writer/director and star Scott Martin, see "Aiming for the Big Kill" online.