Sixty years after Robert Mitchum ran moonshine down Thunder Road in the durable crime drama of 1958, Jim Cummings has appropriated the film title and pointed the narrative engine in a entirely different direction. Cummings’ Thunder Road – which he wrote, directed, and stars in – is an idiosyncratic character study. Based on a short film he made in 2016, Cummings developed it into a feature that has nothing to do with illegal booze and everything to do with the kind of small-town losers with dreams of grandeur that Bruce Springsteen sings about in his anthemic song “Thunder Road.”

Officer Jim Arnaud (Cummings) is a mess, even though most of his problems are of his own making. If he weren’t so tragic a figure, he’d be a laughingstock, and that is the miraculous thing about Thunder Road: a tone that invites you to feel these conflicting emotions in quick succession, or even, sometimes, simultaneously. The opening 10 minutes of the film are a tour de force. In a single take, Jim (while wearing his police uniform) delivers a bizarre eulogy for his mother that’s a heartfelt, comical, anguished stream of consciousness which concludes with his dance performance of “Thunder Road,” delivered sans music because the child’s pink cassette player he brought to the service refuses to play the Springsteen tape. (“Should we call the manufacturer?” he blurts out through his tears.) The scene is awkward beyond belief and it sets the stage for more discomfort yet to come. You’re never sure whether to embrace Jim like the fragile human being he so clearly is, or keep your distance in case he lashes out like a wounded animal.

We observe Jim in several episodic sequences. None are as electrifying as that opening take, but we get to see the character’s short fuse fraying further. His patrol partner Nate (Robinson) tries to be supportive, and his daughter Crystal (Farr) is the light of his life. Jim shares custody with his ex-wife (DeBoer) and he desperately tries to be less inept at parenting. Yet everywhere Jim steps, he seems to blunder. (Everywhere he steps may also have a tinge of familiarity since this movie was filmed in Austin.)

Thunder Road has received oodles of festival awards, including the Grand Jury Award at SXSW. The film is a singular work. Even though it doesn’t always live up to the promise of its opening sequence, Thunder Road is an exhilarating ride. It announces Jim Cummings as a talent to be reckoned with and dances on the jagged precipice of emotional contradictions. It’s a graceless dance to watch, but delivered with the utmost control and grace. 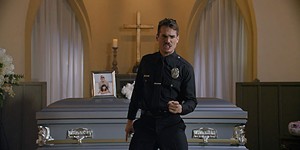 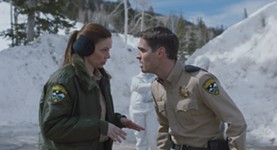