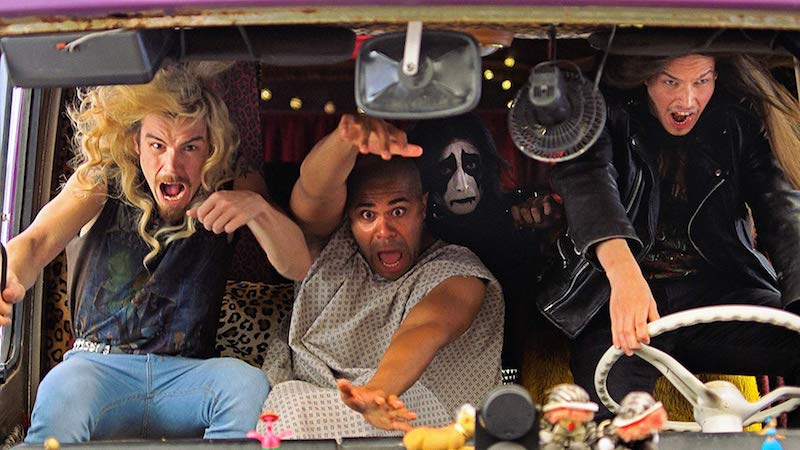 From Wayne's World, through Todd and the Book of Pure Evil, to Deathgasm, the metal comedy has set rules: Underdog with no real skill manages to have the one moment of true rock god glory, and gets the cool girl who is way more metal than anyone expects.

And so it goes with the delightful if low-key Scandinavian comedy Heavy Trip, about a crew of misfit black metal fans in a tiny village. Turo (Holopainen) is the vocalist with Finnish symphonic postapocalyptic reindeer-grinding Christ-abusing extreme war pagan Fennoscandic metal act Impaled Rektum, who manage to get on the main stage at the Northern Damnation festival in Norway. At least, that's what Turo convinces both his fellow band members and the local townsfolk, who normally write him and his pals off as glue-sniffing losers. Which is a fair conclusion, considering that they don't have any original songs, have never played anywhere other than a basement, and Turo instantaneously throws up under pressure.

Embracing your outsider status, disposable drummers, and small-town distrust turning into adulation are the familiar but fun hallmarks of the metal comedy, and they're well executed here – with the addition of reindeer gags, a very annoyed wolverine, corpse paint, projectile vomit, crowd-surfing coffins, and Viking re-enactors. The inevitable third act road trip to the fest brings in some bum notes (especially a brief diversion involving overly armed border guards and a very unlucky bachelor party). But when it avoids pratfall silliness and instead leans into the glorious ridiculousness of it all, as well as its sweetly predictable plot (of course Kuustonen's Miia, the flower shop owner whose father is also the chief of police, will fall for Turo, and of course they'll make it to the show), it's a solid addition to the well-trodden genre. Plus. with a score performed by Funeral for the Masses guitarist Eemeli Bodde and Finnish melodic death metal godfathers Diablo, it's clear that the death metal adoration comes from the right place, and never mocks the much maligned musical subset.

It's no Metalocalypse (pretty much the only metal comedy to completely break the rules), and there are no new classic anthems here, but if you want to bang your head to a very familiar beat, Heavy Trip is a solid cover version.