This fourth iteration of the classic love-and-showbiz fable does its 80-year film legacy proud. The 2018 version starring Lady Gaga and Bradley Cooper, who also directed and co-wrote with Eric Roth and Will Fetters (based on a story by William Wellman and Robert Carson), is a terrific romance and backstage musical, a cautionary tale about the dangers of overnight success and substance abuse, and a morality drama for veterans of the performance stage who see their stardom eclipsed by newer and younger talent. But most of all, this rendition of A Star Is Born oozes with romantic chemistry between Cooper and Gaga, as well as the stunning command of rock & roll visual tropes evidenced by Cooper and his director of photography Matthew Libatique (Black Swan).

The first hour or so of this overly long movie, during which Jackson (Cooper) and Ally (Lady Gaga) meet cute and fall in love, transcends all narrative anchors. Viewers will fall with the characters headlong down the rabbit hole of love, and not care that there’s little more to sustain this first section than the swoony gazes and heady getting-to-know-you conversations, as well as the powerful visual iconography of the spotlight, sun flares, and loving close-ups set against the backdrop of teeming fans.

The film opens as Jackson Maine clambers off the stage and into a waiting car, clearly weary of the professional hustle and eager to swill the alcohol that takes the edge off his worsening case of tinnitus. Bottle empty, he instructs his driver to pull over at a nearby bar, which turns out to be populated by drag queens. Here he sees Ally (a cis-woman with no last name) perform, and is instantly captivated. Ally’s bartop-crooning rendition of Édith Piaf’s “Ma Vie en Rose” ends with Ally turning her face directly toward Jackson and the camera (and us) as her gaze is returned by the azure blue pools of her admirer’s eyes. If it isn’t fully love at first sight, then the first time they sing together surely is. Their voices meld and pull each other higher, putting another notch in the old Hollywood paradigm that believes that singing or dancing together in perfect harmony is the visual definition of a love that’s destined to be. And so it is. A video of their performance goes viral, and everything is tinted with magical fairy dust until the dream turns sooty.

Having already established himself as one of the best actors of his day, Cooper outdoes himself here, performing additional roles behind the scenes. None of his tasks are given short shrift, and his casting of Lady Gaga leads to an inspired performance. In the pair’s first sequence together, he sees her in performative drag as Piaf, but once she peels off the makeup and false eyebrows, she emerges as Ally, an ordinary brunette who thinks her large nose is an impediment to a successful singing career (shades of Gaga’s own life story). Andrew Dice Clay is practically unrecognizable as Ally’s father; Rafi Gavron brings humanity to his role as Ally’s manager, breaking the cliched mold of managers as self-serving monsters; and Ron Rifkin, Dave Chappelle, and others make strong impressions in small roles. Yet as welcome as it is to see him onscreen, Sam Elliott seems misplaced, as if his presence alone is enough to make us believe that Jackson’s voice is at least an octave lower than it is. Thankfully, the 2018 version of the film downplays the older man’s jealousy of his young starlet’s rising fame, and gives it a more contemporary (and less macho) flourish by having Jackson become worried that Ally will lose her soul and creativity to the voracious starmaking machine. A Star Is Born retains the bones of the original story (first brought to the screen in 1937), but its adaptability to the needs of each era shows us why the tale is such a Hollywood perennial. 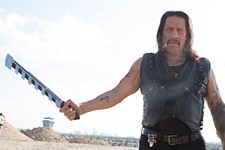