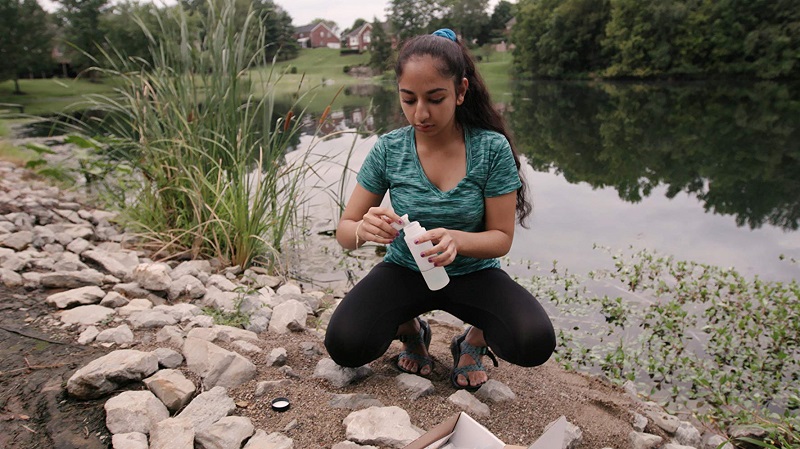 We’ve come a long way from Eighties tropes about nerds – it’s actually “cool” now! But no, really, it is. National Geographic documentary Science Fair will have you know that geekery is alive and well in a new generation. Filmmakers Costantini and Foster previously worked together on the first episode of Netflix's The Naked Truth series, Death by Fentanyl, which followed the opioid crisis in Massachusetts all the way down to the cartels in Mexico. It’s almost a relief to see a lighter subject here: This cast of characters is made up of colorful high school nerds trying to make it to the Intel International Science and Engineering Fair (ISEF). It’s like a pageant for the scientifically gifted. There are hundreds of regional qualifying fairs, and the film tracks clusters of students, working in pairs or as part of a larger group, from all over the world through the qualifying rounds to the big event where 1,700 compete for Best in Show, an honor that comes with a $75,000 prize. This is no small-potatoes affair.

The adorable nerds featured are as charismatic as they are bright, and I assume it was a combination of their personalities and projects that led to their inclusion in the film. From Brookings, South Dakota, to Iracema, Brazil, Gen Z is diligently trying to make the world a better place, whether it’s creating a more fuel-efficient airplane or fighting the Zika virus. (The projects are required to have a “global impact” in order to make the cut.) The gooey heart of the story is something that mirrors the immigrant’s journey: Get out, and make a better life for yourself – and coincidentally (or not) many of the kids featured in the movie come from hardworking immigrant families. And there’s a little bit of an underlying fuck-the-system punk aesthetic that kinda sorta calls out one particular school for investing in sports programs when the football team is 0-9, and yet the students don’t even have a science lab. And that same aesthetic appears in the story of my personal favorite: West Virginia’s Robbie, who managed to program his computer to rap like Kanye West and yet somehow nearly failed his sophomore math class. I was hoping for a bit more of that, particularly regarding the school program funding. It had the effect of opening a door for just a peep, shouting “all good here!” and slamming the door shut.

It’s pretty obvious that the cameras were not allowed access to the actual fair (eight hours of the students presenting to judges) and the filmmakers bypass this lull in the action by interviewing ISEF pioneers: The first award winner, the first female award winner, etc. It gives us just an outline of the experience without showing the whole thing. It’s fine; it works. The future is bright.