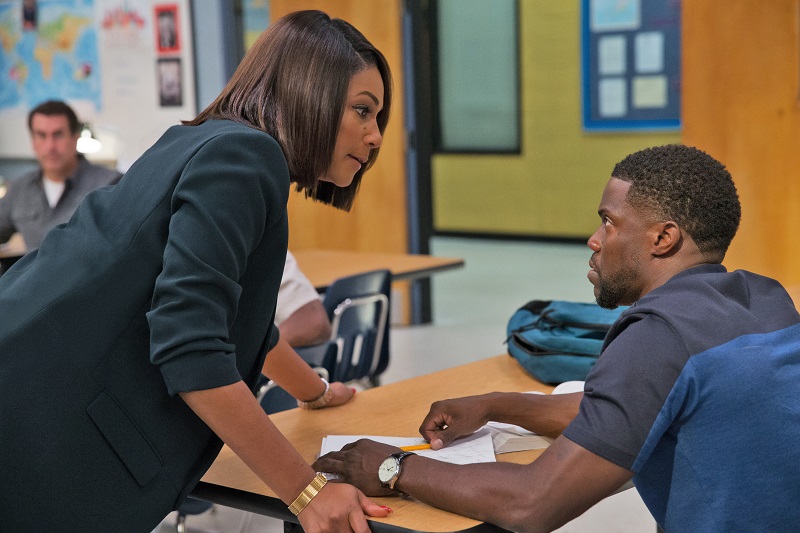 There’s not a lot to be said for comic Kevin Hart’s latest, which is something of a Hindenburgian riff on John Hughes' The Breakfast Club – "Oh, the humanity!” – although in fairness it does remind you that the presumably throwaway comedies of the Eighties were, even at their worst, orders of magnitude more entertaining than post-millennial, submediocre yuk-fests such as Night School. Crafted within the broadest, not-quite-funny brushstrokes possible, director Lee’s movie about a class of troublemakers, hustlers, adult J.D.s, and Rob Riggle’s patented goofy man-child schtick struggling to earn their GEDs at the eponymous classroom fails, epically.

Living far, far beyond his means while wooing his lady love (Echikunwoke), Hart plays high school dropout Teddy Walker, another take on the actor’s hustler with a heart of gold go-to role. After managing to blow up his job as a barbecue pit salesman – via explosively cheap CGI effects – Teddy sets out to scam his way into receiving the coveted GED and a solid job as a financial adviser via an ultra-vanilla friend and cohort (Schwartz). Once enrolled, he finds himself caught in the crosshairs of the kid he bullied all through high school, now the principal of his ex alma mater, and his teacher (Haddish), neither of which is planning on letting him slide through on streetwise charm alone. Also spending his nights with him are a patently generic bunch o’ goofballs, among them the wildly woke, conspiracy-minded Jay (Malco), a vengeful former waiter who longs to be the Mexican Justin Bieber (Madrigal), and Fat Joe as a prison inmate Skyping into the classroom. It’s more than enough to say that hijinks ensue, precious few of them eliciting even the grimmest chuckle.

Blame that on the monumentally lazy scripting by Hart and no fewer than five other writers which takes the low road (i.e., fart, puke, and ass gags) at every opportunity. It all ends, no spoiler here, with an ABC Afterschool Special life lesson that redeems the preceding proceedings not one iota. Also of note: The real-life teacher and Oklahoma striker friend that I took to the screening was dismayed at how truly atrocious Night School was, commenting on how the film’s multimillion-dollar budget would’ve been much better off spent on improving teachers' woefully tiny salaries. Final grade? “F-.”