What is it that primes us to be so fascinated by “end of the world” narratives? Are we all pining that badly to be relieved of our shitty jobs and responsibilities? To trade in our daily commute for hunting zombies, siphoning gas, and foraging for food? Not that that’s entirely the situation in I Think We’re Alone Now. Del (Dinklage) is the only survivor in his town of 1,600; everyone else just sort of dropped dead one afternoon while he was sleeping. He spends his days burying bodies and cleaning out his neighbors’ houses, collecting batteries and overdue library books. At night, he tidies the shelves at the library (his former occupation). Ever the misanthrope, Del doesn’t seem terribly bothered by the fact that everyone is dead. Well, maybe not everyone. When Grace (Fanning) rolls into town and decides to stay, it rankles him but he begrudgingly lets her participate in his daily “chores.”

Reed Morano serves as both director (where most of her experience is in TV, including the first three eps of The Handmaid’s Tale) and cinematographer (where she has a much longer résumé). Most shots are boxed in: buildings on both sides of Main Street, or grocery store aisles framed by shelves. There’s a claustrophobic comfort to it. Once there are two characters in the story, they are presented in sharp focus where the backgrounds are blurred to an almost distracting degree. Nothing else in the world matters beyond them. Yet there is space for silence and reflection, and many shots are quietly beautiful – until a Rush song blares, puncturing the meditative mood. The lighting is natural, providing a dusky glow reminiscent of Days of Heaven. Dust motes everywhere. When the sun has set, the figures are cast in shadow – the place where perhaps our true intentions lie.

The film weaves comedy, horror, and romance without delving too deeply into any of them. The humor is rather dry (and completely dialogue-driven), and the horror only alluded to: There’s something chilling about certain things writer Mike Makowsky leaves to the imagination. Entirely unprovoked, Grace tells Del she was “with a boy” when everyone died; it’s a perfect example of how telling can sometimes be more effective than showing. It stretches that muscle we use when we read books. The story itself is rather thin, and doesn’t much concern itself with the logistics of this particular postapocalyptic world. The theme here is loneliness: Del goes through the sad motions of normal, everyday life; there just aren’t any people around. A nightmare landscape or an introvert’s dream world? 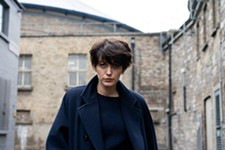