How the world turns: In 1989, the entitled and titular Heathers were the walking embodiment of high school evil. Three decades later, a TV reboot crashed and burned because it didn’t realize that they are now sympathetic. It doesn’t matter how cool they are, or how mean, or bright, or beautiful, that’s never really enough, and it only takes one social media slip to bring that facade all crashing down. Sam Levinson seems to get that, and for his first feature as a director since 2011’s Another Happy Day, he returns to the theme of the destructive power of ugly secrets revealed; only this time, rather than a family wedding being ruined, it’s a whole town.

The modern Heathers (and it’s a comparison the film seems glad to bear) are four girls at a high school in Salem, Mass. Lily (Young) and her pals are implied to be the queen bees of their environment, and take as much glee as anyone when the reactionary, transphobic mayor gets his emails hacked, and someone releases his private pictures of him in lingerie. As trans girl Bex (Nef) notes with disdain, people like her die every day, and people like the mayor don't care, so why should she when the roles are reversed. But then it's the school principal, and then Lily, and then the whole town's dirty laundry is put on global display in a provincial rerun of the fappening. Of course everything is going to break down. Of course the guns and the knives and the ropes are going to come out, and of course the girls, who have lived their whole lives knowing all this nice-nice was just a pretense built on essentials lies, knew this was coming, and that they will be the first victims.

Homophobia, jock culture, body image, #metoo, noods, hacking, the corrosive nature of social media, online celebrities, gun violence, sexual harassment, the male gaze, objectification: Successfully taking on all these issues as parts of the same hideous whole, Assassination Nation works best when it is broad and sharp, but is at its weakest when it is too on the nose. It’s strongest as a metaphor rather than a polemic, and Levinson (who also wrote the script) feels like he’s leaning into the material too much when he sets the film in witch trial country, or has the fat cop talk like a deep-fried Southern bubba, and especially in a girl power resolution that is meant as a call to arms, but feels as forced as that bile-raising Pepsi commercial with Kendall Jenner. Plus, and this may seem like a minor complaint, in a film about teenagers, one in which representation is not just a matter of ticking boxes but a real aspect of the drama, would it be so hard to find actors somewhere near the right age? Unless Levinson hired the 28-year-old Skarsgård as a high school senior in some kind of delayed gag about Jason Priestley in Beverly Hills, 90210, that’s a slightly unrealistic note.

Which is important, because Levinson is going for hyperrealistic. Hungarian cinematographer Marcell Rév puts himself in the top echelons with his kinetic, vibrant work here, smashing Jacques Jouffret's neon-and-blood visual thrills from The Purge series into suburbia with a slick and easy violence, and when the world breaks down – as in one of the most brilliant and sickening home invasions ever filmed – he makes the stylish chaos all too believable. 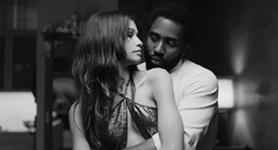