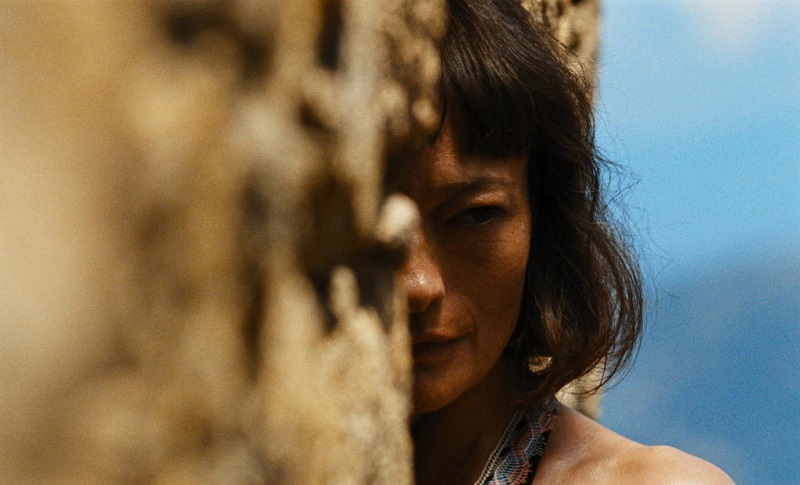 Giallo has been a touchstone of modern genre cinema, from meta-commentaries like Berberian Sound Studio to loving spoofs like The Editor. But it would take the sheer raw spine of writer-director duo Hélène Cattet and Bruno Forzani to plunge headlong into the brutal absurdities of an era of filmmaking that was both bleached out and super-saturated, that drew narrative cues from Left Bank philosophers, pulp dramas, and Grand Guignol histrionics in equal measures.

Not that much seems to be happening initially: Fading and shunned performance artist Luce (Löwensohn) and her lover/collaborator/nemesis Max (Barbé) are facing death by ennui in an abandoned monastery in the South of France, their former sexually charged, avant-garde glories behind them. Danger looms when a gang of bullion thieves pull off a daring heist and hole up with them until the heat dies down – or until the leather-clad ringleader Rhino (Ferrara) decides they need hostages or dead bodies to cover their escape. Betrayal is inevitable, most likely at the sweaty hands of Luce and the crooks' shared attorney (Marchese). Not that Luce seems to mind: after all, anything to break the monotony.

Their third feature collaboration (after 2009's Amer, still inexplicably lacking a U.S. release, and 2013's psychosexual The Strange Color of Your Body's Tears), Cattet and Forzani's blood-and-treasure adventure is a flat-out sleazoid crime drama, one that owes as much to the blood-soaked nihilism of the most dust-encrusted spaghetti Westerns (like Lucio Fulci's Four of the Apocalypse) as it does to the Italian Poliziotteschi crime genre. But its heart is pure yellow (giallo being Italian for yellow, evoking the faded pages of pulp novellas).

Everything is overdriven: The color palette (created by cinematographer Manuel Dacosse, who may be able to see in unearthly parts of the spectrum), the sound mix (be warned: foley artists Aline Gavroy and Olivier Thys clearly hate your ears, and you will thank them for that), the gaping maw of immorality that swallows everything whole. Adapted from Jean-Pierre Bastid and Jean-Patrick Manchette's 1971 potboiler Laissez Bronzer les Cadavres, every cigarette lit is an inferno, every gunshot is a bomb, and every wild, fetishistic flashback scene to when Luce and Max were young and vibrant is dripping with Seventies eroticism. Everything is visceral, like how raw disdain is communicated through an overcooked egg.

What's truly remarkable here is not Cattet and Forzani's control of this wild environment of free-roaming imagery and violence (that's never been in doubt), or their razor-sharp editing, leaping backwards and forwards with time cards to clue the audience in about multiple perspectives of the same moments – or even seconds – from multiple perspectives. It's that they finally produce a truly memorable performance. In their films, characters are components. But Löwensohn's Luce is an amoral fury, as much death goddess as aging libertine, a figure who drives the imagery as much as she is captured by it. In a world where boredom is the only sin, every act of violence or lust is all at her pleasure.

The Strange Color of Your Body's Tears
...