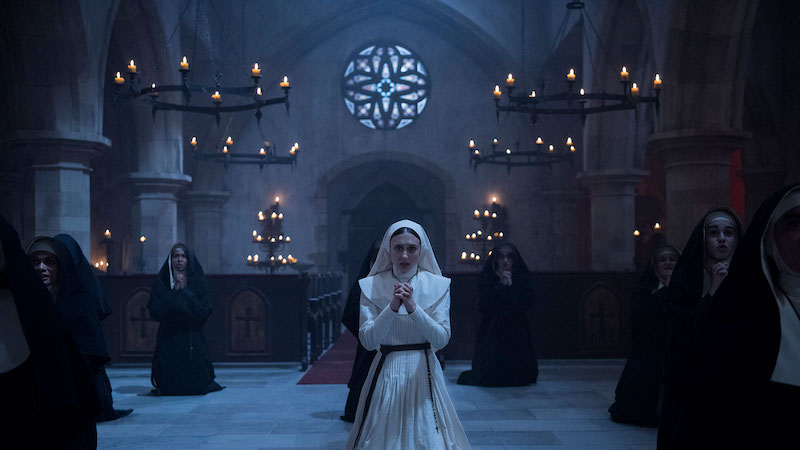 First off: The Nun is quite likely the best entry in the blockbuster The Conjuring cinematic franchise. However, this is still not much of an endorsement.

The series has been built around canonizing infamous mumbo-jumbo hucksters Ed and Lorraine Warren, played by series regulars Patrick Wilson and Vera Farmiga, and seen here in an opening flashback montage. Mercifully this fifth film quickly drops their Seventies globe-trotting for (insert title card) Romania 1952. That's where surly exorcist – sorry, miracle hunter – Father Anthony Burke (Bichir) and novice nun Sister Irene (Vera Farmiga's sister Taissa, so expect that familial link to come up again in any of the three planned follow-ups) have been sent to explore the recent suicide of a nun at a secretive convent in the mountains.

What does any of this have to do with the rest of the series? Well, enter the demon nun (Aarons), first seen in The Conjuring 2, who apparently needs a backstory, one that involves the convent residing in a converted castle that was built on a gateway to hell.

Scriptwriter Gary Dauberman has been charged with expanding franchise creator James Wan's unstoppable money earner, so far being responsible for the dreadful Annabelle and the merely disappointing Annabelle: Creation (inexplicably, he's also co-credited on the script for the far superior It adaptation). This sloppy mishmash of long pauses, broken up with rushed exposition, pulls shamelessly from dozens of much better films. There's some attempt to gloss over the incoherent script by claiming that the demon nun is a form of Valak, and that spirit's powers of deception (although, per the grimoires, Valac is actually a spirit skilled in finding treasure, so more akin to Paimon in the far superior Hereditary). But no simple explanation can brush away the sloppiness of the script.

The saving grace is director Corin Hardy, known previously for his intriguing debut, 2016 pagan eco-horror The Hallow. Within the laid-out confines of the series' visual aesthetic (such as it is), Hardy pushes The Nun into Hammer Horror territory, veering just the right side of camp by injecting some extremely well-executed jump scares.

But he can only do so much, especially with so many baffling decisions – interchangeable supporting nuns, inexplicable accent choices, painfully laugh-resistant jokes delivered by dashing village handyman Frenchie (Bloquet), and a denouement that peddles in medieval-style Catholicism as a bundle of superpowers and trinkets. At least Hardy seems to know that this is just a 90-minute fun house ride.

The Long Dumb Road
The road may be dumb, but at least it's fun