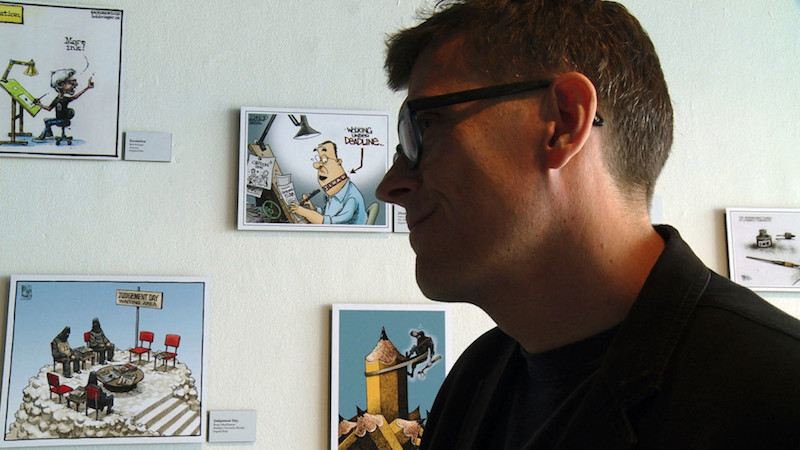 The collapse of print media is naturally one of our favorite topics around ye olde watercooler at the Chronicle, but as we all pour one out, again and again, for the industry at large, not nearly enough ink has been spilled over a particular kind of crusading journalism that’s moved from the endangered to near-extinct status – that of the political cartoonist.

I don’t know that Mr. Fish would call himself a political cartoonist, even though he’s certainly made his mark tangling with politics and culture in provocative and trenchant cartoons printed in the likes of Harper’s Magazine, L.A. Weekly, Utne Reader, and TruthDig. That designation of “political cartoonist” might be too rigid. Too neat. Too kowtowing to someone else’s system of categorization. Going off of Pablo Bryant’s documentary portrait of the Philadelphia-based artist (né Dwayne Booth), I think you could reasonably call Fish anti-war, anti-corporate, anti-capitalist, anti-religious dogma, and anti-systems. All of the systems.

This is going to paint me as hopelessly square, but the person I most connected with for most of Mr. Fish: Cartooning From the Deep End was not the artist, railing against the man, but his wife, Diana Day, sweating their debt, working the job that gets them and their twin daughters health insurance, doing the dirty work that enables him to stand on his principles. Then Bryant’s camera – clearly enjoying unfettered access to the family – tracks them in a low ebb when Booth takes a job at Whole Foods and must redirect his artistic skills to the selling of deli meats and chips in peppy slogans: “I pledge allegiance to the snack.” That he’s sold his soul is understood. What’s worse, he admits to the camera, is that he’s good at it. The moment flattened me. I didn’t stop feeling for his wife, for all her sacrifices; only now I understood why she did it.

On camera, Booth comes off as prankish and peevish in equal measures, and, in the occasional, aching fermata, bone-deep depressed. The film – which tied for first for the Audience Award for Documentary at the 2017 Austin Film Festival – gives him an open and uncritical platform to speak at length on his beliefs, those he’s instilled in his daughters (one of them, on prompt, spells out her favorite word for the camera: M-I-S-O-G-Y-N-Y). More significant is the film’s platform for Mr. Fish’s cartoons, his Molotov pencil cocktails thrown at civility, hypocrisy, false prophets and flimflam men. The art speaks for itself. We should listen.

For an interview with Pablo Bryant, see "The Lost Art of Being Offensive," Aug. 29. 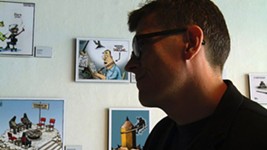 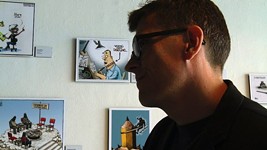 Mr Fish: Cartooning From the Deep End With Director Q&A
...