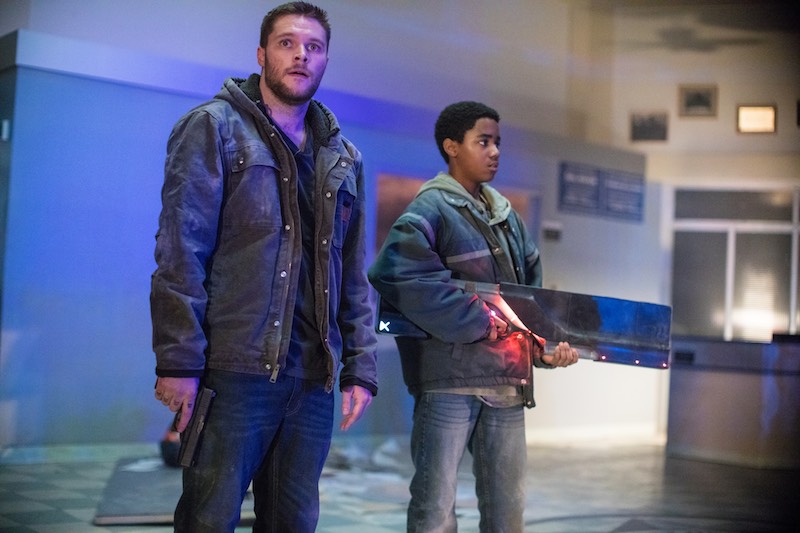 This mash-up of family drama and science fiction is a pleasant but unconvincing adventure with strong adolescent appeal and music by Mogwai. Kin presents the story of an adopted child who finds a powerful ray gun in an abandoned factory and then goes on the lam with his scoundrel brother, who is trying to escape even worse scoundrels who want to collect the money he owes them. Along their journey, the brothers pick up a female love interest, and engage in a couple of spectacular ray-gun shoot-outs. And before the film closes, sequel possibilities are floated. Kin appears as though it aims to spawn.

Eli Solinski (newcomer Truitt) is a black preteen who was adopted by white parents sometime in the past. We first see him visiting his adopted mother’s grave before hopping on his bicycle to sneak into an abandoned factory where he has made a habit of stealing copper wire for personal resale. He lives with his gruff and hard-working but well-intentioned dad Hal (Quaid). Then, the arrival of Hal’s biological son Jimmy (Reynor), who has just been released from years in prison, bursts their uneasy domestic harmony. Jimmy owes a lot of money to the gunrunning hoodlum Taylor Balik (Franco), who paid Jimmy’s protection money while he was imprisoned. Now that he’s out, the loan has come due and Jimmy stoops to nefarious strategies to repay the debt. Things go wrong and Jimmy flees, taking his brother, a cache of money, and the hidden ray gun along for the ride. Milly (Kravitz), a pole-dancer with a heart of gold, joins them after the blaster impressively blows out a wall in her place of business. All the while, the brothers are being chased by a couple of ray-gun protectors, otherworldly enforcers who dress Terminator-style and zoom toward its signal on motorcycles seemingly fueled by the speed of light.

Kin introduces us to a new pair of filmmaking brothers, Jonathan and Josh Baker, who have based this feature on their short film “Bag Man,” although the screenplay was written by Daniel Casey. The film’s special effects appear rudimentary, relying mostly on a light show rather than the ray-gun’s decimating consequences. The performances are solid, and Quaid’s presence lends an extra solemnity to the family-drama aspect of the film. Franco’s performance, however, may prove distracting to those familiar with his turn in Spring Breakers where he was unrecognizable as a gangsta with dreads and a gold grill; his Kin appearance offers a wan comparison. At best, Kin presents a potent wish-fulfillment fantasy for adopted children everywhere who imagine fabulous lineages born of royalty or superpowers – anything but the flawed parents who left them to be adopted by big-hearted strangers. Supra-human biology, thy name is destiny.

For an interview with directors Jonathan and Josh Baker, and screenwriter Daniel Casey, see "The Baker Brothers Find Their Kin," Aug. 30.