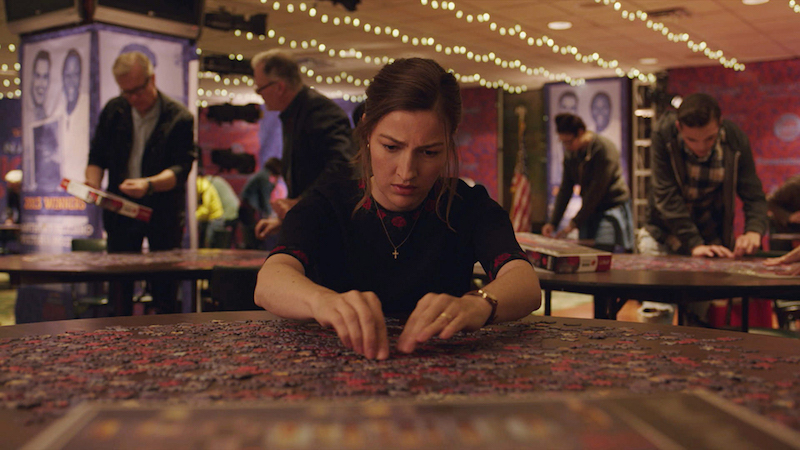 A suburban housewife discovers she has an aptitude for rapidly solving jigsaw puzzles, and the revelation of her special talent gradually frees her from the drabness of her life. Until puzzle competition enters her world, Agnes (Macdonald) appears self-effacing and unfulfilled as she carries out her family and church obligations to little acknowledgment or appreciation. She lives with her husband Louie (Denman), an auto mechanic who owns his own shop, and her two grown sons, one a self-absorbed teen (Abrams) and the other an unwilling and unsuitable conscript into the auto-mechanic business (Weiler). Louie is a gentle man but takes Agnes for granted and only notices her feelings when supper isn’t prepared on time.

Quite by chance, Agnes realizes her mad puzzling skills. She receives a 1,000-piece jigsaw puzzle as a birthday present (at a character-revealing party she hosts during the film’s introductory sequence) and spreads out the pieces on the kitchen table after cleaning up once the guests leave. She assembles the puzzle in what, even she realizes, is spooky-quick time. Hooked, she boards the commuter rail from Connecticut to Manhattan (where she hasn’t ventured for years) to visit a puzzle shop and acquire more challenges. There, she notices an ad placed by someone looking for a puzzle partner. Courageously, she replies, and later travels back to the city to meet her fellow puzzler Robert (Khan), an Indian inventor who lives in an exotic apartment. Although they appear to be opposites in disposition and attitudes, their fondness for each other gradually meshes as perfectly as their puzzle pieces.

We’ve seen this story before: a mousy housewife opening up to undiscovered passions or a young person acquiring self-confidence and self-esteem through the discovery of a sports skill or some other competitive aptitude. Puzzle is a remake of a 2010 Argentine film of the same title by writer/director Natalia Smirnoff. The new screenplay is by Oren Moverman (The Messenger) and Polly Mann, and is directed by prolific indie producer Marc Turtletaub (Little Miss Sunshine). Visually, Turtletaub leaves little imprint on the film, and never solves the inherent problem of how to make the process of fitting puzzle pieces together interesting for the viewer. These shots are kept to a minimum, however, and we do get to appreciate Agnes’ face deep in concentration. And that is really the reason to see this movie: the lovely performances of Macdonald and Khan. An underappreciated actress since her breakout more than two decades ago in Trainspotting, Macdonald is always a treat to watch. And with any luck, the popular and critically acclaimed Indian star Irrfan Khan (Life of Pi, Jurassic World) may find greater crossover success with his wily and sexy performance in this film. Ultimately, the intricacies of Puzzle may not fully occupy the viewer’s mind, but the film passes muster as a diverting pastime. 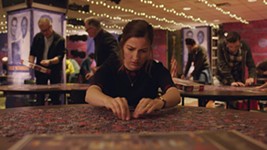