It is mildly depressing and not all that surprising that of six close friends casually polled, not one of them was familiar with the 1973 Steve McQueen/Dustin Hoffman prison epic Papillon. So that means that any kind of pearl-clutching affront to a new version of French convict Henri Charrière's autobiographical novel will mostly fall on deaf ears. I will say this to the dozen or so fans of the original who might be reading this: It’s not worth it. To everyone else, however, this is a competent and at times compelling retelling of the life and incarceration of one of France’s most infamous prisoners of the last century.

Charrière (Hunnam) is better known by his nickname Papillon (French for butterfly, after the tattoo prominently displayed on his chest). A safecracker by trade, the film opens in Paris, 1931, with Papillon deftly absconding with a small fortune in diamonds. Keeping a couple for himself, he turns the rest over to the local crime boss and then meets up with his gal Nenette (Hewson). These opening scenes of the wistful decline of the Années Folles are appropriately decadent, the camera veering from the packed crowd at the Moulin Rouge through city streets teeming with all manner of performers with such a forced frenzy that it feels like the film needs to cram as much ambience and topless dancers and gangster glamour into five minutes because the next two hours are gonna be a dour hell. And they are. Papillon is framed for the murder of a pimp (the jewels he failed to turn over to his mob boss the perceived motivation) and is shipped off to to the French prison colony of Guiana, on the northeastern coast of South America. It is a brutal and heartless place, one where life is a series of brute labor, humiliation, and thin soup for meals, where the only way to ease any suffering is through financially greasing the wheels of the corrupt guards and turnkeys.

On his leisurely voyage across the ocean (well, a milquetoast gets disemboweled for the money he has stashed in his colon, but such are the hazards of travel), Papillon befriends Louis Dega (Malek), a bookish forger who just so happens to be a millionaire. The two enter into an agreement whereby Papillon will protect the meek Dega in exchange for funding their escape. And thus a lifelong friendship is born. Through thwarted escape attempts, double crosses, and years spent in a brutal solitary confinement, the film delineates the bonds that tie the two together, the triumph of the human spirit against an onslaught of oppressive torture, and the banal dehumanization that humans exact on one another.

And on and on. Michel Foucault would be smirking in his grave at the thought of this film, although his book Discipline and Punish wouldn't be published until 1975, six years after Charrière’s novel was released, on which both films are based. Hunnam and Malek acquit themselves more or less successfully, but with a tatted-up Hunnam delivering lines with a contemporary accent, it often feels like some time travel episode of Sons of Anarchy (a cameo by fellow SAMCRO Tommy Flanagan only confirms this thesis). I like when a film takes a laissez-faire attitude with accents, instead of having characters speak in distracting ways (although it is ironic that Hunnam, a Brit, is playing a Frenchman and speaks like an American), but having the French Guiana guards talk like they are from New Jersey is either a bold move or a gross oversight (going with the latter on this one). Malek fares much better, eschewing most of the tics that made Hoffman’s performance in the original film seem a bit too much Inside the Actors Studio. The pair have chemistry, and their bromance is much more developed and has real gravitas in the third act. The canvas of the limited spectrum of downtrodden, emaciated prisoner to the liberated and reformed spirit is what most films about prison life traffic in, and Papillon hits those cues with such rigorous regularity you can set your clock by them. If you’re a fan of the two leads, it is worth your time, but if you’re a fan of the original film, it becomes more of a curio, an interesting comparison of filmmaking in the Seventies to what contemporary cinema gives us today. 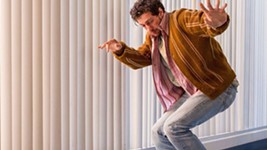