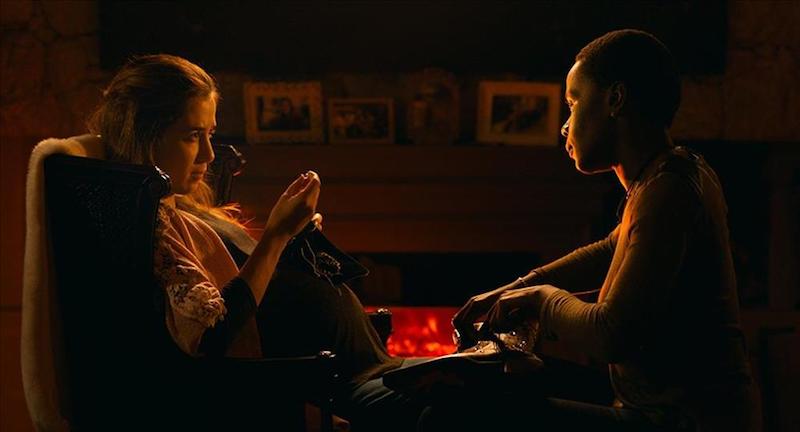 Clara (Zuaa) and Ana (Estiano) are the oddest of couples. Clara is unemployed, cruising lesbian clubs but incapable of following up on her flirtations, nursing the one beer she can afford. Ana is rich, and carefree; or she was until she got pregnant in the most unusual of cicrumstances (and it wasn't just that she pulled some stranger in the back of her car while her fiancé wasn't looking). In the latest collaboration between longtime writer/director team Marco Dutra and Juliana Rojas, their inevitable physical attraction is the only predictable component of this tale of racial and class barriers crossed in São Paulo, Brazil.

But there's more than meets the eye to this shaggy dog tale, as Ana's bursts of narcolepsy aren't just because of her imminent maternity (for which she hires Clara as a nanny), but because the absentee daddy was a werewolf, and now she's pregnant with a lycanthropic baby.

This would seemingly place a lot of stress on the budding relationship, and the fact that it doesn't is one of many odd choices in this magic realist drama. There's a melding of grim street life and the indulgences of wealth, but it's interspersed with fairy tale logic: Ana's upscale apartment is literally concrete, but the gleaming tower blocks in the distance are illustrated, having more in common with the City of Oz than a central business district.

That edge of the mystical is probably the best explanation for why Clara and Ana are together – a bonding that never seems fully explained, beyond neither having anything else in their lives. Clara in particular seems stuck in wallflower mode, even when every moment of bizarreness around the increasingly eccentric and unglued Ana is a red flashing light.

Her decisions make much more sense in the second half, when she's raising the young pup (played in a thin layer of fur that she must shave by Lobo), and balancing her love for the boy with her need to keep everyone safe from his toothier instincts – a challenging task as his bloodlust starts to catch up with his adolescent hormones. Here Zuaa brings a certain tragedy as the adopted mother to an increasingly out-of-control child. Yet while it's refreshing to see teen lycanthropy handled as something other than a metaphor for sexual awakening, Good Manners dawdles on its way to a surprisingly predictable and unearned resolution.