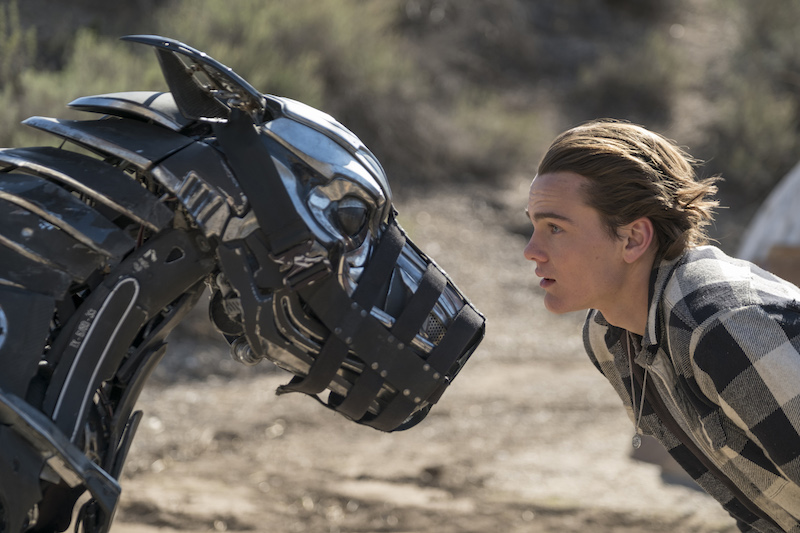 Despite its inherently tricky audience appeal, Hollywood has gotten a surprising amount of mileage out of the teenager-befriends-unstoppable-killing-machine narrative. Movies like Terminator 2: Judgement Day and The Iron Giant serve as the standouts, but the execution is typically the same: boy meets robot, boy teaches robot what it means to be human, government hunts boy, and robot eventually destroys itself in a heartwarming display of self-sacrifice. What A.X.L presupposes is this: What if that killer robot ... looked like a dog?

Based on Daly’s 2015 short film "Miles", A.X.L follows Miles Hill (Neustaedter), an amateur motocross racer who, by his own admission, sucks at everything that isn’t a dirt bike. Together with his mechanic father (Thomas Jane), Hill is able to use his mechanical smarts and underdog spirit to hold his own against a rich rival (MacNicoll), but all of that changes when Hill stumbles across a military prototype for a fully automated attack dog. It isn’t long before Hill is on the run from government agents, trying to protect the growing intelligence of his robot companion Axl from those who would see it fulfill its purpose as a four-legged gun.

As a creature, Axl is buried beneath the uncanny valley of movie robots, possessing many of the mannerisms of man’s best friends – including rocket-powered zoomies! – without any of their aesthetic warmth. Perhaps because of this, the filmmakers cram the film with practical effects, allowing Neustaedter ample opportunities to convey intimacy to his audience through a shared physical space. More interesting is the view through Axl’s eyes. The heads-up display featured in the film has a unique way of showing human faces. Every time someone new interacts with the robot, their faces swims in and out of focus from a cloud of human-shaped pixels. It’s a design decision every science-fiction filmmaker should look to borrow in their project.

Sadly, this is really the best the film has to offer. Like its titular character, A.X.L is a pastiche of familiar parts constructed in a lab, a blend of science-fiction and extreme sports tropes that result in little more than an audition reel for the film’s young stars. Perhaps with a more adventurous creature design – or stakes that rose above the film’s mild ‘PG’ rating – A.X.L might have referenced better films while still finding its own voice. If you really must watch a movie about an outdoor biker and his robot dog, seek out Miles on Vimeo. At least the short is only seven minutes long.