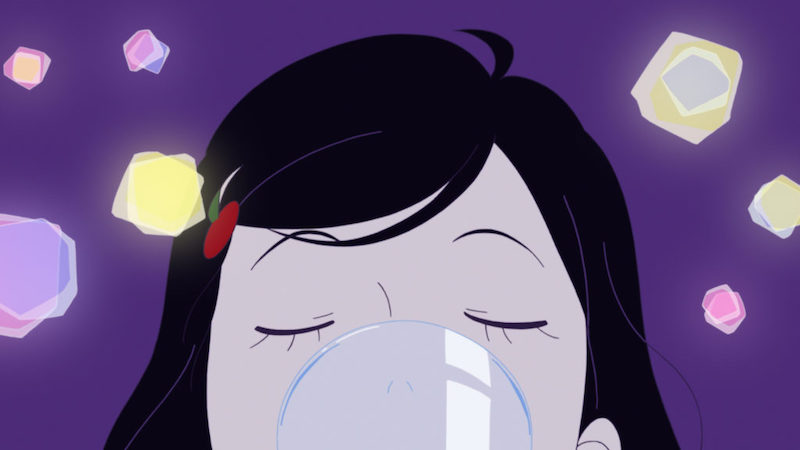 Ever had one of those nights out where everything just falls into place, and everyone just seems perfectly friendly or harmless or easily ignored, and it all turns into a big, fun adventure? That's the entirety of the plot of the awkwardly and inaccurately named anime The Night Is Short, Walk on Girl. The night is anything but short, and the protagonist – simply known as the Girl With Black Hair (Hanazawa) – goes everywhere but home. She ditches a boring boozy party to go out for a night in Kyoto's Ponto Town district, and launches into a cheerful, psychotropic, pop art cavalcade of adventure. Many are inspired, or at least cross paths with, her two new drinking buddies, the amiable Higuchi (Nakai) and chirpy Hanuki (Kaida). Meanwhile her fellow student, the clueless Senpai (Hoshino), is nursing a huge crush on her, and is convinced that if he can just accidentally bump into her enough, that they'll end up together. As the night goes on, her adventures get wilder and more joyous, while he ends up in ever more embarrassing situations.

Each has their own vibrant, wild adventure, filled with hot pots, marketplace gods, too much underwear, too little underwear, impromptu guerrilla street theater, semi-mythical bootleg rum, library police, homemade cold cures, musical numbers, erotic woodblock prints, magical carp tornadoes, inflatable cowboys, and the most unrequited love and cross-dressing you'll find this side of a Shakespeare problem play. Night Is Short doesn't make a lot of sense, but then it's not supposed to. It's a series of crazy scenes with a daffy logic all to itself, and it is endlessly and effortlessly charming. All the while, there's a very affirming message about how romance shouldn't be hard work, and a subtle demolition of what to U.S. audiences will translate as the "nice guy" trope.

Think of it as the drinking-age elder sibling to director Yuasa's provincial teen mermaid fantasy Lu Over the Wall. It has the same fluid, soft animation; the same drifty, loopy logic; and the same sense of wonder, just soused in a constant flood of alcohol. Everyone is tipsy all the time, and that's how Yuasa can get away with making what would, in lesser hands, just be a boozy bar crawl into something lighthearted and fantastical. 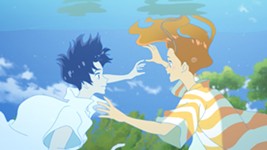 The Night Is Short, Walk on Girl, Masaaki Yuasa