Similar in some ways to Larry Clark’s controversial youth-gone-wild flick Kids, Skate Kitchen revolves around a group of young people, sex, skateboarding, and the joys and perils of hanging out, getting stoned, and partying in New York City’s Lower East Side. Unlike Clark’s 1995 film, however, the kids presented here are for the most part all right. This is director Moselle’s narrative feature debut following her acclaimed debut doc The Wolfpack and it focuses on the real-life, all-female NYC skate crew of the title.

The actual members of Skate Kitchen – you can check ‘em out on Instagram – play fictionalized versions of themselves, acting within the boundaries of Moselle’s script, which more or less obliterates the line between documentary cinema verité and traditional narrative filmmaking. As a result, Skate Kitchen’s mild melodrama meanders all over the place, not unlike the many skateboarders who shred the skate parks and streets, carving hypnotic, slo-mo figure-eights or outrageous triple ollies on every available surface and obstacle.

After a gnarly accident involving her deck and her crotch gets the introverted 18-year-old skate rat Camille (the excellent Vinberg) banned from skating by her overprotective single mother (Rodriguez), she clandestinely hooks up with the Skate Kitchen posse and discovers the joys (and pains) of female solidarity in a sport long dominated by misogynistic Thrasher bros. That’s about the extent of the borderline generic coming-of-age plot, but exploring the niche subculture of this interracial, pansexual band of outsiders in all its mundane detail makes for a surprisingly sweet film.

Nina Moran is a standout as the queer Skate Kitchen badass: With her backward b-ball cap, loud surfer shirts, and long blond hair, she could’ve kickflipped into Moselle’s movie directly from Stacy Peralta’s four-wheeled, SoCal history lesson Dogtown and Z-Boys. None of the young women in the Skate Kitchen crew are in any way “skate bettys,” the old-school term for girls who’d hang out with skaters but rarely if ever mounted a Zorlac double-cut of their own. Instead, they’re presented as, to use the current slang, totally valid, dude, living in a hyperreal and (to quote skate rock legends Agent Orange) totally bitchin’ summer, bloodstains and all.

For an in-depth interview with the cast and crew, read "What's Cooking With Skate Kitchen?" Aug. 16. 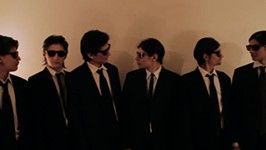