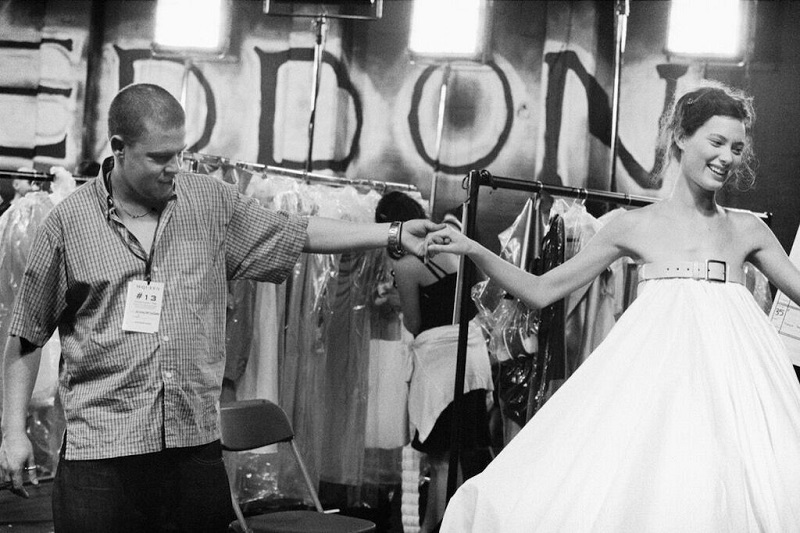 This documentary about the late British clothing designer Alexander McQueen puts the viewer in the right headspace right away, and I mean that literally: The film opens with a camera slowly swirling around a skull. Red droplets splash on the cranium. In Michael Nyman’s score, a brass section booms rhythmically like blood in your ears. The effect is brooding and provocative. It’s pure drama. It’s perfectly Alexander McQueen.

Returned to throughout to mark chapter breaks, the skull motif serves another purpose: of previewing McQueen’s design aesthetic via images projected onto the skull, butterflies alighting on the empty eye sockets, and golden ram horns fused to the bone, all of it at once gorgeous and macabre. These sequences were created by McQueen’s nephew, Gary James McQueen, who worked in his uncle’s atelier and also sits for the camera, one of many of the designer’s intimates who speak lovingly of the so-called bad boy of British fashion, who took his own life in 2010. They include some of the first collaborators who joined up with him after his Savile Row apprenticeship and stint in fashion school, when the self-described “East End yob” launched his eponymous line, and others who came on when Givenchy hired him as chief designer – an uneasy fit. Home videos show McQueen and his team giddy and almost impossibly young, full of laughter. Some of that team dropped away as his star continued its meteoric rise (the estrangement with early patroness Isabella Blow figures prominently) and as wealth, fame, drugs, and the punishing pressure of producing 14 collections a year all contributed to a deepening depression.

A handful of models also speak to their experience with him, but notably not Kate Moss, a close friend, or Shalom Harlow, whose 1999 catwalk moment being sprayed with a paint gun wielded by two giant robotic arms is the stuff of legend. Only in this case, the legend is real and preserved in perpetuity on tape, one of a dozen of his astonishing and transgressive shows featured in the film. They were as much performance art as clothes showcase, and a very public expression of McQueen’s private torments and fixations. Even more than the moving testimonials of his friends, it is this access, this front-row seat to the spectacle and staggering genius, that makes the film a must-see. It’s as close as most of us will ever get to a McQueen original.