In 1999, The Austin Chronicle published a piece in memory of Blaze Foley, an influential singer-songwriter who was shot and killed a decade earlier in Austin at the too-young age of 39. That article, which revisited Foley’s impact on his fellow folk musicians and explored the addiction issues he shared with his friend Townes Van Zandt, helped introduce a new generation of music fans to Foley’s work. It also paved the way for Kevin Triplett’s 2011 documentary Blaze Foley: Duct Tape Messiah, which featured rare footage and comprehensive interviews with some of the people who knew Foley best. Seven years later, Foley has finally gotten the biopic treatment his life so clearly deserved, with native son Ethan Hawke adapting biography Living in the Woods in a Tree: Remembering Blaze Foley for the big screen.

In keeping with the fragmented life of its lead character, Blaze (executive produced by Chronicle co-founder Louis Black) breaks down the story of Foley (Dickey) into three unique sections. In one, we watch him play to an empty Austin bar as he finally issues recordings of his original works; in another, we listen to Townes Van Zandt (Sexton) discuss the brilliance of his friend in an interview performed shortly after Foley’s death. Connecting these two narratives is an exploration of Foley’s relationship with ex-partner and Living in the Woods author Sybil Rosen (Shawkat), a love story that follows the two from Texas to Chicago to New York City and back again. Each framing device offers a different perspective of the singer’s career, and like Foley himself  –  a man with countless stories to his name, some of which might even be true  –  each viewpoint only adds to the legend of the man’s complicated life.

Despite his unique career path, there are times when Blaze seems cut from the same cloth as countless other musical biopics. Hawke’s film may move neatly between several periods in Foley’s life, but the progression of his story is not altogether unfamiliar. We watch Foley and Rosen’s relationship flourish until the demands of the music industry pull the two of them apart; Foley also falls in with a crowd of musicians  –  led by Van Zandt  – who openly embrace their self-destructive lifestyle. Those who complain about the predictability of music biopics will find more than a few familiar notes in Blaze, even accounting for its multiple chronological storylines.

What separates Blaze from its peers, however, is the obvious affection the filmmakers have for their assortment of damaged characters. In Ben Dickey, Hawke and company have found a remarkable physical and musical double for Foley. The Arkansan first-time actor is able to capture both sides of the singer-songwriter, including the man’s warmth toward his loved ones and anger toward all injustices (actual or perceived). Still, Blaze cannot help but be anchored to Shawkat’s performance. The film is adapted from Rosen’s book on her own complicated relationship with Foley, making this Shawkat’s story to tell. Her relationship with her partner may falter, but Rosen remains a resolute and independent person throughout, and there’s a maturity to their love story that feels welcome from a biopic.

And then there's the music. In casting professional musicians to play both Foley and Van Zandt, Blaze has put the two artists' songs front and center, exploring music in the noncommercial venues they frequented throughout their lives. This is as much a love letter to the vibrancy of local music scenes as anything else; we see him perform in family-style restaurants, hotel rooms, and half-empty dive bars, often listening to his gruff voice above the clamor of polite conversation and waitstaff. Even the frequent altercations between Foley and members of his audiences are handled off-camera, keeping the focus on the lo-fi performances he strung together throughout his career. You may not always like the man, but Blaze makes sure you'll damn well love his songs. 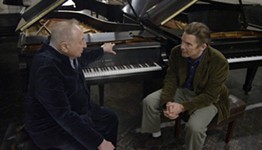 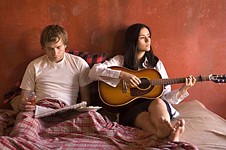 The Hottest State
Ethan Hawke writes and directs this story based on his own novel about a lovesick narcissist in New York City.