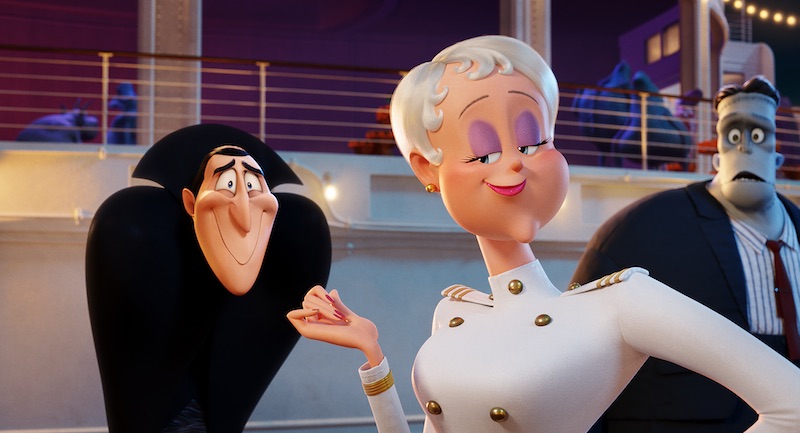 The latest installment of the Hotel Transylvania franchise (which includes two other films as well as a Disney “prequel” TV series) marks the first time the setting changes from the family’s castle hotel. Misinterpreting her father Drac’s loneliness for the stress of overworking, Mavis (Gomez) plans a surprise cruise vacation to the Bermuda Triangle (where else?) on what appears to be the actual RMS Titanic. And, naturally, the whole Hotel crew comes along. Drac (Sandler) immediately “zings” (falls in love with) the ship’s captain Ericka (Hahn) whom Mavis doesn’t trust, and for good reason – she’s a Van Helsing, one of the legendary vampire hunters. Struggles, shenanigans, and slapstick routines ensue.

The plot is a kitchen-sink mash-up for sure. I was delighted to find more Easter egg references to folklore than I recall from the earlier movies, and they’re not just limited to vampires. In one early scene, the monsters travel via rickety old war plane that is helmed by gremlins. In what is either truth or an instance of mass hallucination, these same mythical creatures (sometimes referred to as goblins) have been accused by pilots as trying to cause mischief during World War II (shout-out to the Lore podcast). A later scene has strong Raiders of the Lost Ark vibes, but I don’t think you’ve really lived until you’ve witnessed a CGI kraken dancing La Macarena. Atlantis is reimagined as a deliberately destroyed city of monsters, but also a modern casino located in the Bermuda Triangle …? It's a bit of a stretch really, but this storyline provides some interesting, and colorful, backdrops at least.

No offense to composer Mark Mothersbaugh (who is heavily involved in all three films) but the soundtrack is better this time around, thanks to some heavy, entrancing, villainous beats by DJ Tiësto. And I didn’t have to listen to Adam Sandler rapping (“The Zing" song is literally the worst). The obligatory dance finale has a darker undertone than usual: The monsters are depicted as a marginalized population that has traditionally feared violence and even extinction at the hands of their Aryan nemeses. All the movies have hinged on this idea, yet this time the message of acceptance is a little bit redundant – but this is intended for a younger audience I suppose. One more time for the people in the back: Love is love, ah ah ah. 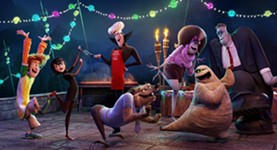 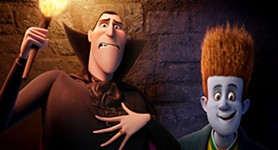 Hotel Transylvania
There's no need to put a stake in the heart of this animated film full of familiar monsters; it's already deadly dull.