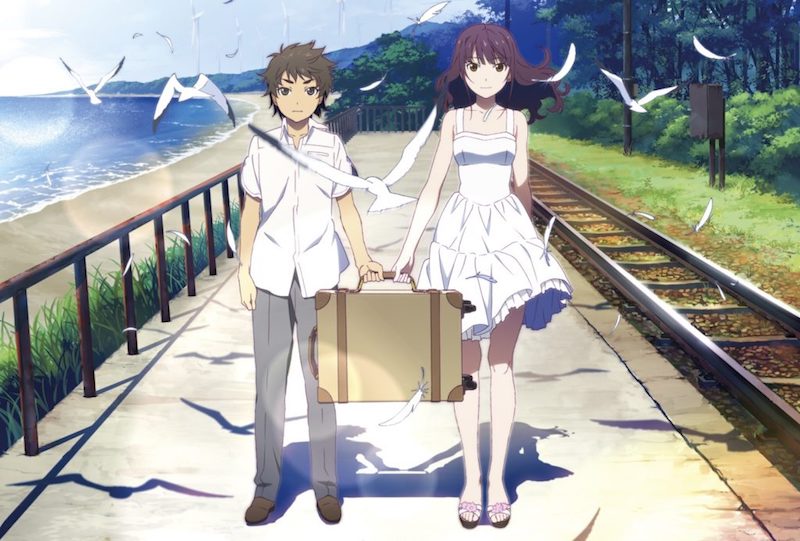 Are fireworks flat, so they only look beautiful from beneath, or do they explode in three dimensions? That seemingly innocuous and slightly absurd question is the strained metaphor in time travel anime Fireworks. In the archetypical Japanese coastal town, best friends Norimichi (Suda) and Yusuke (Miyano) bicker about traditional teenage boy matters - classes, girls - as well as more obtuse matters like the shape of fireworks. Their friendship starts to disintegrate around Nazuna (Hirose), the tall, mysterious girl in their class, and the subject of a crush for both boys. She seemingly has bigger fish to fry, not least that her mother is remarrying and dragging her off to Tokyo. Her failed attempt to run away, with Norimichi’s assistance, get a surprise do-over courtesy of a magical marble, one that bears a noteworthy (but never explained) similarity to the town’s lighthouse.

The latest feature from veteran TV animation director Akiyuki Shimbô. Fireworks is an unlikely adaptation of Shunji Iwai’s 1993 TV drama Fireworks, Should We See It from the Side or the Bottom? It was part Fuji TV’s If, a series of “what if?” -style stories, where the protagonists would get to play out an everyday drama with two very different results (so if there any pangs of reminisce of Gwyneth Paltrow’s sappy 1998 fantasy Sliding Doors, Fireworks beat it to the time-and-again romance punch). Since the original only ran 49 minutes, Hitoshi Ohne’s screenplay has a lot of work to fill out a feature running time, and that’s done by doubling down on the mystical/sci-fi component, and the visual possibilities of high-budget anime.

That’s to both the gain and detriment of the story. The original had that grimy, shot on video, made-for-TV feel that added a certain adolescent desperation to the budding romance between Nazuna and Norimichi. In the original they were also supposed to be barely teenagers, with Nazuna further down the path of adolescence than the tween boy. That disappears here, with both aged to 15: plus any reveal that Nazuna is on the cusp of womanhood (so pivotal in the original) is botched here because she’s drawn like the standard distaff anime heroine. Fortunately, the script eventually reveals that she’s a lot more than just a plot device for the boys to moon over, but it sometimes seems like the more prurient artists at the animation department never got the memo.

Fireworks undoubtedly keeps the grounded, sometimes melancholic strands that lead to Iwai snagging the Directors Guild of Japan New Directors Award. The boys are written like real teen boys, and if Nazuna initially seems like a pixie dream girl, that’s a bubble blown only to be deliberately burst. Yet ultimately, it succeeds best when it gives in to that high fantasy, including some truly beautiful and stylized sequences of flashbacks and forwards, and a lyrical closing sequence when the pair must choose what set future they will accept. But for all its charm, it suffers in comparison from being released so close to producer Genki Kawamura's blockbuster masterpiece of second chances, the enchanting and nuanced bodyswap romance Your Name.