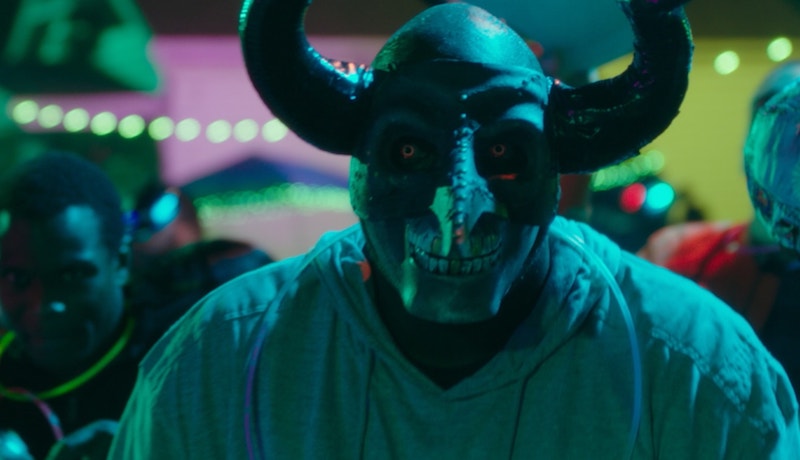 Let's face facts: The Marvel Cinematic Universe is the movie franchise we want. The Purge is the one we deserve. The 2013 original was a hand grenade rolled under the door, a stealthily political (and, in hindsight, unnervingly prescient) metaphor for middle-class compliance in an era of mob rule. The second film, 2014's The Purge: Anarchy asked why otherwise upright citizens would take advantage of this ghoulish endeavor; then 2016's The Purge: Election Year looked straight in the eyes of the theocrats, plutocrats, and oligarchs who would benefit from mass murder.

The key to the series' success was always that it never seemed implausibly far from where America is now. The question is, what was the push? How do you convince a civilized nation to indulge in 12 hours of utter lawlessness, once a year? Well, as shown in The First Purge, it's the experiment, as devised by Dr. May Updale (Tomei), a deranged sociological field research program based on the idea that, if people can just burn out all their anger, they will become law-abiding citizens (and what's a few thousand dead bodies as the cost of a stable society, right?). But even the populist political force New American Founding Fathers can't get this craziness off the ground without convincing the American public (read: the white middle America of the first film), so they organize a test run on Staten Island. Some residents leap at the chance to participate in another paid clinical trial – five grand is five grand, after all. Some treat it like Mardi Gras with even fewer cops. Some, like street corner dealer Isaiah (Wade), see it as a time to get even with no consequences. Yet many are more wisely leery, like Isaiah's sister, community organizer Nya (Davis), and ex-soldier turned drug lord Dmitri (Noel), who doesn't trust anything he doesn't understand.

For the first time, series creator James DeMonaco steps aside from the director's chair. Those duties are handed off to Fruitvale Station producer Gerard McMurray, who dealt with similar themes of complicity in his directorial debut, college hazing drama Burning Sands. That means DeMonaco could concentrate on his script, which is no less unflinchingly polemical as the earlier films. Notoriously parsimonious producer Jason Blum also opened up the infamously tight Blumhouse purse strings a little bit for the latest cinematic installment in the franchise, before it makes the leap to TV this fall. Still, for a studio action flick, this is run-and-gun cinema, and McMurray makes every penny count, not least by emulating DeMonaco's trick of showing greater horrors and other people's purges in quick shots, or as protagonists pass by. That said, he doesn't have DeMonaco's deft hand balancing action, horror, and political rhetoric, and supporting characters tend to disappear and reappear when convenient for the plot.

Yet he still delivers a chilling allegory, filled with equal quantities of violent frights and stomach-churning visual metaphor. So four episodes in, and The Purge franchise is as nakedly provocative as ever. In its attacks on scarcely disguised racist and classist policies, and on bad science in the service of worse politics, in its evocations of Blackwater in New Orleans, agent provocateurs, the power of hopelessness, the normalization of extremism, and its crowd-pleasing warning about the easy path to fascism, The First Purge pulls no punches. Like Childish Gambino said, this is America.