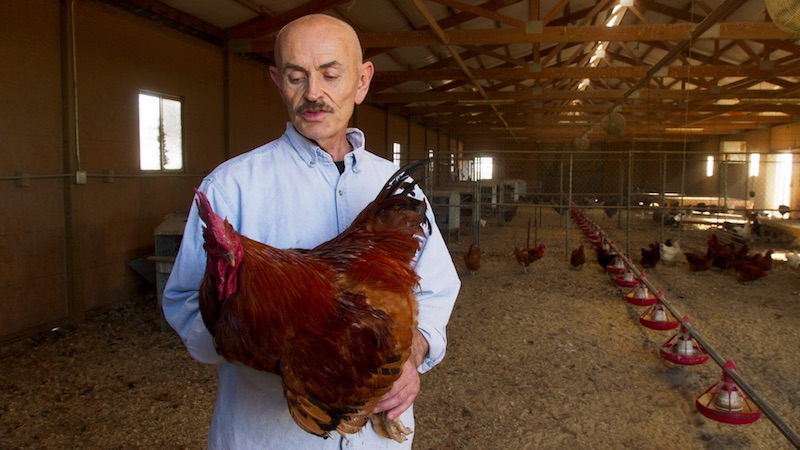 With our entire universe in flux – the border crisis, the Space Force, and starving polar bears – what we have for lunch hardly seems critical. Eating Animals sets out to show us exactly how important – and how futuristic, socially conscious, and environmentally imperative – it is that we actively seek information about the origin of our food. Specifically, the animals we eat and their increasingly popular byproducts. However, the problem with this documentary, inspired by a book of the same name by Jonathan Safran Foer dedicated to the global effects of meat consumption, is not its intent. It’s the execution. And because it’s produced (and narrated) by one of Hollywood’s finest actors, well-known vegan Natalie Portman, the clout, and expectation, is staggering. I have been researching and writing about food for more than a decade, with “eating animals” a central theme throughout. I wanted to love this film.

The beginning drags, offering a history lesson about the rise of America’s quintessential factory farm, the atrocity-laden, fast food chicken spot, Colonel Sanders’ Kentucky-fried empire. When the film gets going, it soon hits cruise control at a steady, vanilla pace. With such a straightforward title, it’s a safe bet the filmmakers would prefer all of humanity simply switch gears and stop consuming animals. But that assertiveness never happens.

Certainly, the film’s aesthetic is powerful, with the luscious rolling scenes of Midwest turkey farms yin-yanged with downright horrific footage of cruel machinery, inhumane treatment, and deplorable conditions that mass-produced factory farm animals suffer from birth to death. Unless you’re a sociopath, you agree that no living creature deserves that. The film drops the ball by failing to employ any sort of relatable narrative that could bring in the viewer and usher in the natural connection between cow and medium-rare rib eye, between heritage turkey and basting instructions on an American holiday, between emotive and intellectual members of a tight-knit family and sizzling pieces of bacon.

It’s clear that factory farming is the enemy, and Eating Animals would have you believe that some farmers – the former backbone of the American economy – are food industry messiahs, saving us from monoculture and its Beef Council checkmarks. But even for me, an animal lover, a believer in the power of storytelling, and an advocate for meatless meals as often as possible, I just kept waiting for a revelation, or a reason (beyond the horror show footage) to care. Every interviewee is a nice white man, save for the tearful woman lamenting the loss of her marriage because of her farmer husband’s newly adopted advocacy. (The turkey farmer’s clear affinity for his flock does pepper the film with some color.) But there it is: There is no emotional connection, no clear call to action, no electric wave of epiphany.

The film aimed to suggest humans ought to take small steps toward reducing meat consumption, supporting small farms and advocating for change at a federal level, and being fully conscious of our food sources. I just wish they’d tried harder to climb down from their luscious cashew milk cabana to talk to people in the real world.