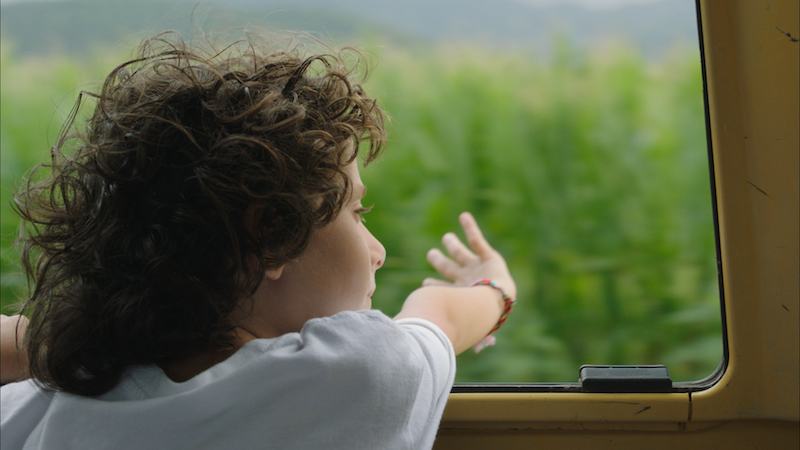 Children, it is said, are resilient creatures, able to survive physical and emotional difficulties while retaining few, if any, permanent scars. Although that’s generally true, it shouldn’t imply that a child’s experience of difficulties is free of pain, confusion, and suffering. Even if the discomfort doesn’t metastasize into a lifelong fixture, the discomfort is a present-day irritation for the child who is experiencing it. This is the territory explored in the Spanish film Summer 1993, which shows how a young girl integrates into the family of her aunt and uncle after her own mother’s death has left her orphaned.

The feature film debut of Carla Simón is a semiautobiographical work which presents a child’s conflicted attitudes about the death of her parents and absorption into a new family unit. Frida (Artigas) is about 6 years old when her mother dies; her father had passed sometime earlier. As the movie opens, Frida is playing with friends in the street in her hometown of Barcelona while fireworks explode overhead. Indoors, her relatives bustle around the apartment she shared with her mother, emptying its contents and packing up the rest. Frida can hear them in hushed tones talking about her mom and herself, but is not really able to truly comprehend the words’ import. Soon she is whisked off to the Catalan countryside to live with her mother’s brother Esteve (Verdaguer) and his wife Marga (Cusí), and their daughter Anna (Robles), who appears to be about 3. The city girl finds a lot to like in the natural setting, as well as having a little sister to play with. Her aunt and uncle are warm and loving, and her grandparents and other relatives come to visit often. Yet Frida cannot resist “acting out” on occasion, testing her new family’s love and limits.

Most damaging is Frida’s lack of solid information. Although the word AIDS is never uttered, it’s clear to viewers that this is what killed Frida’s parents. The regular blood tests administered to Frida make her aware that there is something to worry about, even if she’s not clear what that is. When Frida falls down and scrapes her knee in a playground, other mothers hustle their children away from her bloody knee in a wordless panic that was all too common during the early years of the AIDS epidemic. Another day when Marga stays home from work because she feels ill, Frida worries, and Marga’s explanation that it’s just her period while tossing out a blood-dampened sanitary napkin doesn’t offer Frida the comfort she seeks. Neither do the prayers her grandmother makes Frida promise to recite nightly. The religious words are a meaningless jumble, but a Madonna shrine that Frida finds carved into a tree offers some mystical solace.

Summer 1993 reveals itself to us as if it were a scrapbook of memories tumbling forth. Some are clearer than others, yet the movie retains a subjective, childlike point of view. Essential to the film’s success is the authenticity of the two young girls. Both are amazing naturals, most of the time behaving as if they are totally unaware that there is a camera present. Simón never milks her story for sentimentality or emotional extremes, and even though Marga and Esteve are also shown facing challenges integrating Frida into their family, Simón’s focus remains on Frida, who has fewer resources with which to deal with the situation. The outlines of the story leave a lot for the viewer to color in, and there are instances in which Simón takes this tendency too far. Winner of the Best First Feature Award at the 2017 Berlin International Film Festival, along with numerous other awards, Summer 1993 is like looking at someone else’s family photo album, seeing some points where the images might have ceased altogether but knowing that, once more, a young girl’s resilience has shaped her adversity into art.