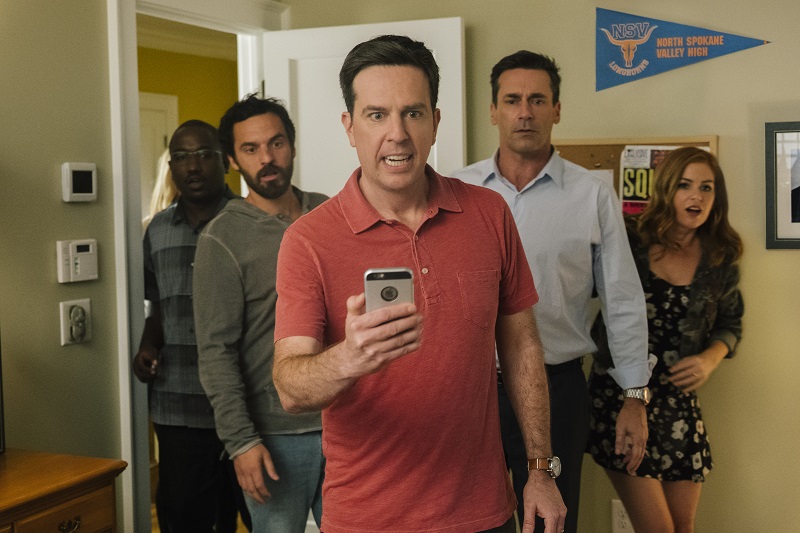 We don't stop playing because we grow old; we grow old because we stop playing. If that quote wasn't so wordy, it could easily be on the poster for Tag, a hilariously silly comedy based on an absurd true story.

In 2013, The Wall Street Journal ran a story about a group of school friends who have been playing the same game of tag for 23 years. Every February, they go to extreme measures to make sure the other guy is it. Tag the movie is just that with an all-star cast.

No one is too far out of their comedic wheelhouse. Helms is Hoagie, the nebbish nice guy, married to the overly competitive Anna (Fisher, continuing her untouchable run of off-kilter love interests); Buress is Sable, a walking inner monologue, deadpanning half-formed but incisive thoughts; Hamm is Bob, the slightly sleazy but charmingly ruffled businessman; and Johnson is Chilli, the lovable burnout. Together, they're fun, but it's when Renner enters the picture as, well, basically Hawkeye (A-ha! So THAT's where he was during Avengers: Infinity War!) that Tag goes berserk to uproarious levels.

After a decade of directing sitcoms, sketch comedy, and stand-up specials, first-time narrative feature director Tomsic appreciates tag the game is rollicking, laughing, running idiocy. So Tag the movie is a kinetic delight, with every game an overblown action sequence. But when Renner's Jerry gets involved, he slows down to bullet time, as he dissects how each of his idiot friends is going to play right into his hands. He so outclasses his buddies that Tomsic can throw in a sequence that is a picture- and note-perfect Predator spoof, and it actually works. He's the grand master, not beyond inviting Chilli and Bob's mutual teen crush Cheryl (Jones) to his wedding to disrupt their plans.

Much of its success depends on Tag, unlike so many recent comedies (looking at you, Life of the Party) not having a mean-spirited word in its entire script. Sure, the guys pull some pretty low tricks on each other, but they are all covered in detail and legal under the games' extensive amended rules. Moreover, even when there's a couple of dirty tricks played, they really don't count because, all the way through, there's a real feeling that they are friends. There's such an easy bonhomie between the core four, with Jerry being just the right amount of outsider, that pantsing and butt-punching or the odd bit of home invasion is perfectly fine.

What's even more charming is that some of the sequences are based on real tags from the actual game. Stick around through the credits to see the actual players, and spot the differences (first, there's actually 10 of them, and second, none of them look like Jeremy Renner). But most importantly, see the similiarity: it's goofy, harmless fun between a bunch of pals that grew up but never grew apart.