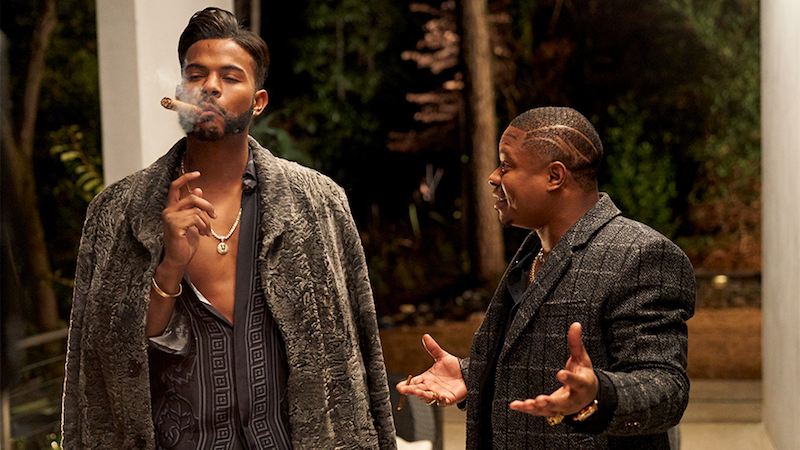 The latest release from the Remakes Nobody Asked For assembly line is this update of the 1972 blaxploitation classic Super Fly, which was directed by Gordon Parks Jr. (whose father helped launch the blaxploitation genre the year before with the direction of Shaft), and starred Ron O’Neal as the iconic Youngblood Priest, the Superfly of the title. The reboot moves the action from Harlem to Atlanta, and essentially hews to the original’s storyline and characters. Priest (Jackson) remains a successful cocaine dealer who wants to leave the business after one last big score, and although in this iteration Priest is more talkative, the character retains his cool demeanor and presentation, as well as his ethical decency. More bling accompanies this remake, however, and in the end, has the effect of diminishing the character’s exceptionality in the community. The original film highlighted the idea that drug-dealing was one of the only ways a black man could achieve financial success in white America. This time out, the characters talk about wanting the American Dream, but all that term signifies here is a desire for cash and flash – the outward signs of prosperity, minus any ideals about equal opportunity and upward social mobility.

Never fear: The new Priest, with his leather coat and slicked-back hair that someone refers to as “Morris Day-like,” has style to burn, just as the character did in 1972. In an attempt to update the man, instead of cheating on two separate girlfriends, Priest now has two live-in gal pals with whom he enjoys steamy bed and shower scenes. This may pass for modernization, but the bodily exploitation of the women is just as misogynistic as it ever was. Director X, an in-demand video creator for the likes of Rihanna, Drake, Jay-Z, Usher, and Kanye, delivers the requisite action in his first feature outing, yet doesn’t infuse SuperFly with the amount of snazz and spectacle that one might expect from a crossover video director. A few sequences have a certain sting – i.e., a car chase that ends with a crash into a Confederate statue, the venality of the dirty white cops (Morrison and Durkin) – but, for the most part, the film seems to run on autopilot. Curtis Mayfield’s celebrated score from the original film is referenced in a couple of places, but the film wisely sticks to new music produced by hip-hop artist Future. Antwan "Big Boi" Patton appears in an entertaining role as Atlanta’s weaselly mayor. Atlanta may have dibs on Youngblood Priest this time, but even though the character is still fly in this reboot, it would be a stretch to regard him as truly superfly.