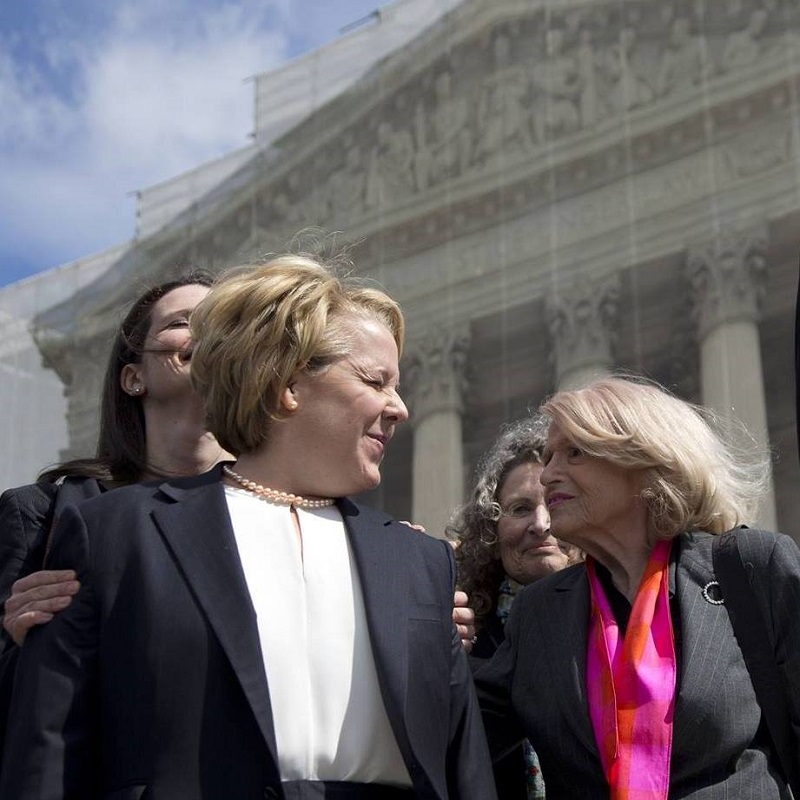 On June 26, 2013, the Supreme Court of the United States came out swinging against the Defense of Marriage Act (DOMA). Five years later, same-sex marriage is now the law of the land. While this may have seemed like an obvious and inevitable transition for many Americans, filmmaker Donna Zaccaro has set out in her new film to remind us that this accomplishment was as much the result of decades of hard work and activism as it was a single court case.

To a More Perfect Union: U.S. v. Windsor revisits Edie Windsor's ongoing battle to be treated as the legal spouse to her late wife, Thea Spyer. When Windsor was hit with a hefty estate tax after Spyer’s death, she was contacted by New York attorney Roberta Kaplan, who offered to take on her case pro bono. The film takes us inside both women’s separate marriages, finding parallels in the experiences of both generations and highlighting the domestic life that inspires them to fight for a better future. While many people played a key role in bringing the Windsor case to the Supreme Court, the film is clear that the unique partnership between these two women was the driving force of it all.

In interviews, Kaplan describes Windsor and Spyer’s marriage as the perfect encapsulation of the fight for equality by same-sex couples in the 20th century. Echoing that sentiment, To a More Perfect Union frames the decision to affirm same-sex marriage as part of a larger cultural evolution. Zaccaro draws on different eras in American political history  –  the AIDS epidemic, the passing of DOMA, the repeal of Don’t Ask, Don’t Tell (DADT)  – to suggest that Windsor was, in addition to her intelligence and charisma, the right plaintiff at the right time for the country. This, when taken alongside the shifting approach taken by presidential administrations toward the issue of gay marriage, helped encourage public sentiment regarding same-sex marriage to "evolve" publicly over time.

Given the film’s modest 63-minute running time, To a More Perfect Union is understandably brief in its history lessons, pulling together journalists and academics to provide a rough outline of the various factors that led to the final ruling. Still, it’s hard to watch and not reflect on the film’s message in the current political climate. With another Supreme Court case, Masterpiece Cake shop vs. Colorado Civil Rights Commission, making headlines this past week, it is plain to see that same-sex marriages are still under fire in the U.S. The film’s quiet confidence in an evolved America only tells half the story; as a result, it already feels like more like a prologue than a happy ending.