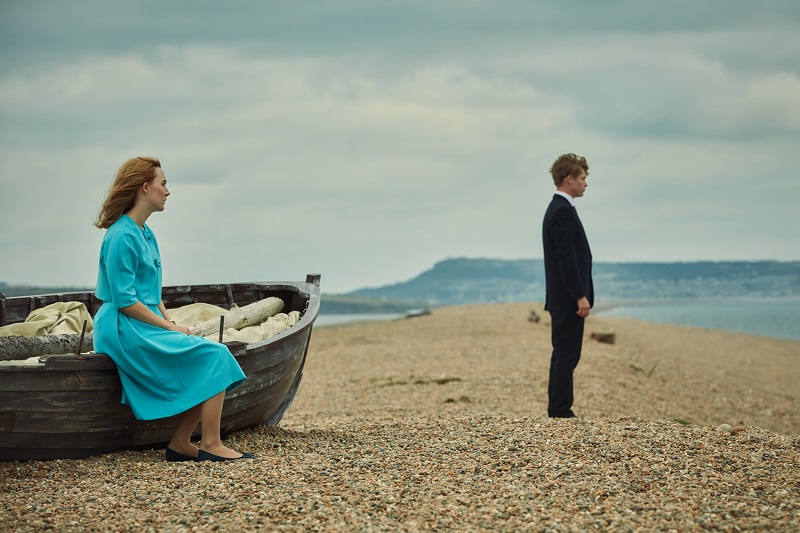 Quiet desperation, as Pink Floyd so adroitly observed, is the English way, and Ian McEwan's 2007 Booker short-listed novel On Chesil Beach is a soft-spoken but devastating reminder of that truth. This film adaptation, with a script by McEwan, reinforces the idea that the past is a foreign country, especially when it is indeed the past of a foreign country. The cut-glass English accents of Florence (Ronan, for once being allowed to play close to her age) and Edward (Howle, currently also starring opposite Ronan in The Seagull) may be misinterpreted as a unifying factor. But this is a different time, and there is a huge social divide between the son of an elementary school teacher from outside of Henley and the daughter of the kind of well-to-do parents that holiday in Europe, with a mater that gossips with Iris Murdoch, who only listens to classical music.

This is 1962, well before the sexual revolution – indeed, in pointed fashion, it's the year before sexual intercourse began. That's what Philip Larkin claimed in his poem "Annus Mirabilis," and it's a thread that has been drawn straight to McEwan's work. His lovers find themselves in the days prior to that watershed: As Larkin painted it, "Up to then there'd only been/ A sort of bargaining/ A wrangle for the ring/ A shame that started at sixteen/ And spread to everything." Ed tries, tentatively, to introduce her to this newfangled rock & roll, and she smiles politely, to please him. So goes their awkward honeymoon dinner, their failed first attempt at sex, its catastrophic fallout. It's the kind of emotional capsizing that, at the time, would have been written off with wisdoms like, "Marry in haste, repent at leisure." Yet there is a darker tragedy that makes their inevitable fracturing even more tragic.

Neither character is the villain here, because both are victims, in different ways, of the moral certitudes of the time. This was an era when you did not talk of such things, and sex ed was something you got from a medical book (Florence reading a passage of a manual she has acquired to her sister makes it all sound as appealing as a midwinter dip in the chilly waters off the Dorset Coast.) Neither Florence nor Edward has the emotional tools to talk about sex, and as their childlike romance flopsweats toward adulthood, the hidden cracks only shake apart harder.

On Chesil Beach communicates all this miscommunication perfectly, capturing precisely the time and the culture, and most especially the era's tightly wrapped attitudes to sexuality. It's kin to the revisionist history of Call the Midwife, replacing that show's sometimes mawkish manipulation with a desperate destiny. All of which makes it all the more baffling that Cooke and McEwan felt obligated to underline their message with two awkward flash-forwards, neither of which add any value but to rub salt into already exposed wounds. Yet those heartbreaking opening acts, with Florence's brittle desperation shattering against Edward's failed attempts to live up to the ordained model of brusque masculinity, become a finely painted portrait of crumpled lives.