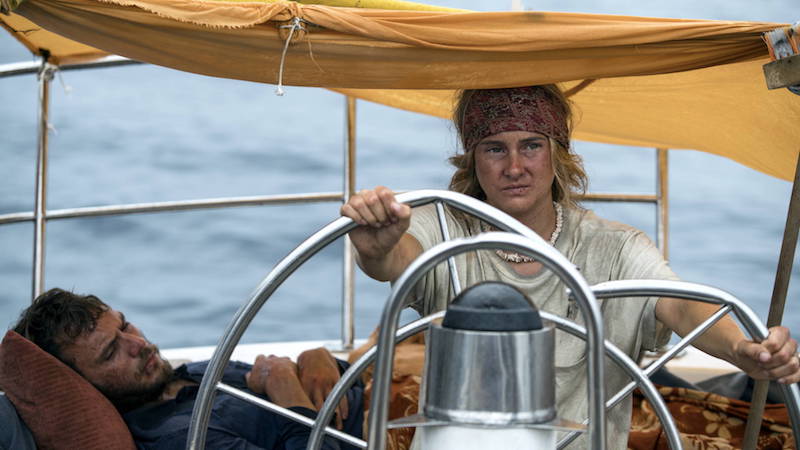 Adrift is a shipwreck movie that is drawn from the true experience of Tami Oldham, who in 1983 survived 41 days adrift in the Pacific after the yacht she was sailing with her fiancé Richard Sharp was pummeled into floating kindling by Hurricane Raymond, a quickly intensifying and unpredictable storm whose peak winds reached 145 mph. Adrift is also a handy one-word description to sum up the film’s tenor: unsure of whether the sea epic intends to be a love story or an action vehicle. Like the peanut butter that serves as a primary source of sustenance in the film, Adrift can be devoured in smooth and/or crunchy modes: high-seas romance or cataclysmic adventure. There are commendable aspects to recommend each approach, yet the final result is an uneasy blend.

Veterans of two different Lionsgate franchises, Shailene Woodley (Divergent) and Sam Claflin (The Hunger Games), co-star here as Oldham and Sharp. Both actors have subsequently honed their dramatic skills in such works as The Fault in Our Stars and Big Little Lies (Woodley) and My Cousin Rachel and Me Before You (Claflin). Interestingly, The Fault in Our Stars (2014) and Me Before You (2016) are romantic dramas in which adventures of the heart are stymied by the presence of physical disease. Even more curious is that each of these commercially successful films was released into theatres during the first week of June. That pattern, whether intentional or coincidental, suggests that Adrift aims more toward the romantic angle of the story, capitalizing on out-of-school teens looking for starry-eyed PG-13 summer fare.

Icelandic director Baltasar Kormákur, however, is best known for his films made at home and in Hollywood, many of which emphasize action which occurs as the result of natural catastrophes or other physical adversities. Frequently, these movies take place at sea (Everest, The Deep, Contraband, The Sea), perhaps not surprising for someone who hails from an island nation. Cinematographer Robert Richardson is an ace lensman, whose award-winning contributions to many films by Oliver Stone, Quentin Tarantino, and Martin Scorsese attest to his visual ingenuity, which ranges from hand-held documentary style to dramatic expressionism. Together, Kormákur and Richardson create gripping action sequences, with the film’s terrifying opening (Tami suddenly awakes from unconsciousness in the hull of a sinking boat) setting the bar for all that is to come. Woodley, who appears in nearly every frame of Adrift, is equal to the task and reaffirms her stature as one of the best actors of her generation. Adrift is, at its best, an exciting, exclusively female-enacted adventure story, and it’s always a pleasure to be able to focus on a heroine’s feats rather than her mere physical presence.

The movie seems to stray from Oldham’s book, Red Sky in Mourning: A True Story of Love, Loss, and Survival at Sea, concerning the fate of Richard Sharp. Yet the film plays things safely by presenting the story as open to interpretation. Early on, Richard warns Tami that one of the greatest perils of being lost at sea is hallucinations. The filmmakers make it possible for us to either understand Tami’s 41 days adrift as a partial hallucination or accept everything we witness at face value. This solution seems a little too equivocal for an action story, but less so for a romantic tale. Also pushing the edges of authenticity is the absence of sunburns and sharks. Adrift, ultimately, is a maritime adventure that’s more akin to Titanic’s mix of love and salt-water sprays than the ascetic dynamics of Robert Redford’s late-career masterpiece All Is Lost – which, at least, bodes well for the film’s future at the box office. Beast
Idris Elba versus a lion in this throwback creature feature 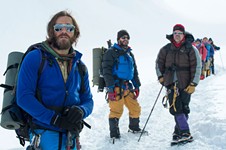