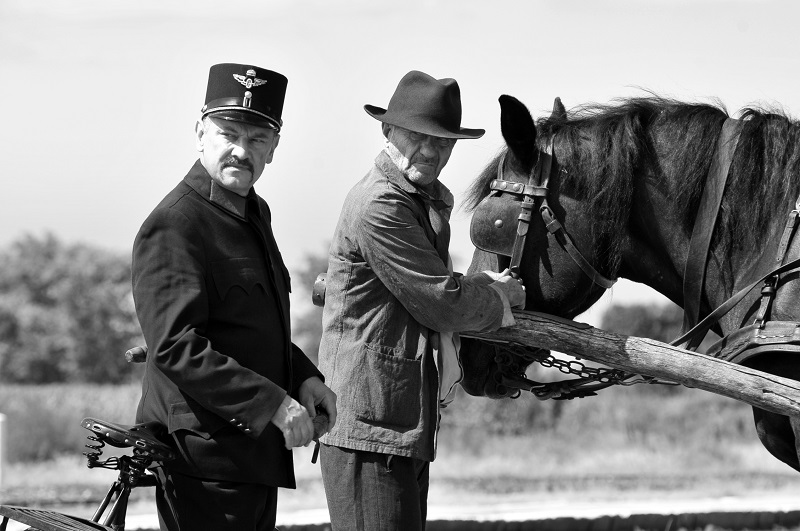 When it comes to matters regarding politics and history, few film industries can match the introspection of Hungary in the years following World War II. Filmmakers like István Szabó (Father) and Miklós Jancsó (The Round-Up) have spent decades examining both their country’s history and the subjective nature of cultural memory, exploring not only the atrocities visited upon the country by its occupiers but the evils enacted by its citizens as well. Those landmark works of Hungarian cinema have found their successor in 1945, a new film that takes an unflinching look at a nation’s anti-Semitism that led to the death of hundreds of thousands of Hungarian Jews.

In the waning days of World War II, village leader István (Rudolf) is a busy man. Not only is he preparing his community for the marriage of his oldest son (Tasnádi), he is also working to enforce his community’s independence in the eyes of the Russian occupying troops. István’s leadership has brought the village through the war seemingly unscathed; food, liquor, and resources are plentiful, and István’s son even managed to avoid enlisted service when the fighting was at its worst. This peace proves to have come at a very high cost, however, as the arrival of two Orthodox Jews (Angelusz and Nagy) to the village quickly brings past sins of István and his companions into broad daylight.

Filmed entirely in black and white, 1945 serves as both a reminder of Hungary’s complicity in the Holocaust and as an examination of what happens when an entire community is asked to keep one horrible secret. As word spreads that the two men are approaching the village  – passing from person to person with alarm but little surprise  – guilt, fear, and outrage become the dominant emotions of the day. Török and cinematographer Elemér Ragályi use the monochromatic color scheme to heighten the lines in their characters’ faces, enhancing the paranoia felt by most villagers as they realize their reckoning might finally be at hand. As we learn the cause of the sudden disappearance of the village’s Jewish families  –  and the reasons behind István’s sudden accumulation of wealth  – 1945 reveals how easily an entire community can be caught up in this betrayal. In one memorable scene, the town priest (Gados) simply refuses to hear a confession as it would mean admitting culpability in what the town has buried.