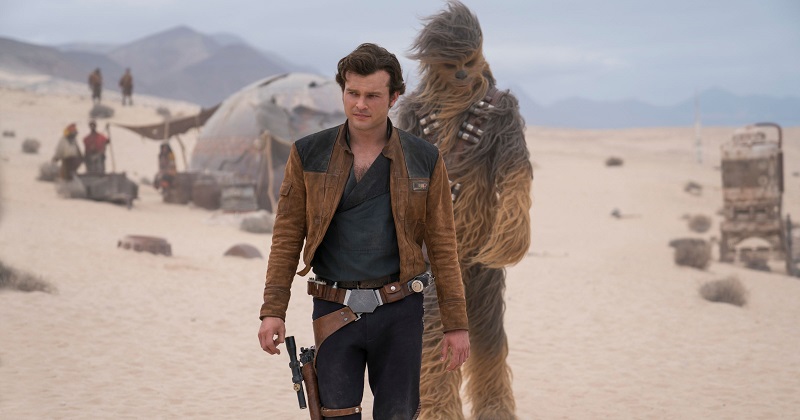 Why did Han Solo boast that he did the Kessel Run in 12 parsecs? It’s the kind of seemingly trivial question that has kept Star Wars fans arguing for literally decades. Finally, there is a definitive, Lucasfilm-sanctioned answer, courtesy of the second in the Disney-era of stand-alone films.

This was always going to be a risky venture, having a younger actor stand in for an iconic performer from the originals. In this case, it’s Ehrenreich (Hail, Caesar!) strapping on Harrison Ford’s gun belt and flight boots as the young Solo – rogue, smuggler, ex-Imperial trooper. The cocky flyboy with the fastest ship in the galaxy, the Millennium Falcon, a Wookiee co-pilot (Suotamo giving a gleeful brutality to the part), and a few questionable friends, like Lando Calrissian (Glover, stepping into the stylish shoes and swirling capes of Billy Dee Williams). Except here he has none of those things. This Solo is a Corellian street rat who gets out, joins the Imperial Navy, and tags in with a band of thieves headed by the unscrupulous Beckett (Harrelson). They end up in debt to nefarious gangster clan Crimson Dawn – but surprise, surprise, one of their chief lieutenants is Qi’ra (Clarke), who just happens to be Solo’s childhood sweetheart.

Solo is the simplest of crime genres, the heist movie. You assemble a band of diverse and clashing talents, throw in a few hiccups and betrayals, and voilà! It’s also the Han Solo origin story. Or at least the new version, since the old, pre-Disney iteration had explained most of that in the vast array of spin-off fiction known as the Expanded Universe. There’s no heavy lifting to be done here, just have fun with the material. And yet fun is oddly lacking.

This plugs into the deeper, ongoing question: What is modern Star Wars? Clearly, producers Kathleen Kennedy and Lawrence Kasdan (who pulls script duty with his son Jonathan) have an idea. But so far their vision is opaque, thus potentially explaining their seemingly freewheeling approach to hiring and firing of directors. Going from original helming team of Phil Lord and Christopher Miller (fired mid-shoot) to Ron Howard is a radical change – two impish iconoclasts replaced by a skilled craftsman – and the end result is workmanlike. It has neither the ludicrous humor of the duo, nor the kinetic sensibilities of Howard at his best. It's like Kennedy and Kasdan wanted their own Ant-Man, changed their minds during production, and decided to make another Rogue One. Except we already had Rogue One, and it did “gritty underdogs on a mission” much better (plus Alan Tudyk's version of the exasperated droid sidekick is light-years ahead of Waller-Bridge's mechanical Jacobin L3-37).

There's nothing terrible about Solo. It can be spectacular, it can be charming, but it lacks sparkle. The mandatory references feel crowbarred in, rather than organic – for example, the first viewing of Corellia, one of the franchise's great iconic but so far unseen locations, should carry more heft. Moreover, there are such overt nods to the old Expanded Universe (is the Crimson Dawn really different from the Black Sun?) that they become redundant. If you know those stories – and a lot of people grew up with them, and still cherish them – this feels like a script cobbled together from Wookieepedia and then gently massaged. Oddest of all are some surprises that seem too much to be just tying Solo to both the original trilogy and the prequels, and may well be an attempt to kick start a new sub-franchise. Good luck with that.

It's tough to ignore the tonal divisions. There are moments of genuine humor, and the sparkling moments of romance between Qi'ra and Han have a Casablanca-esque tragedy to them. Yet then there are long periods of surprisingly dour narrative, and furrow-browed ruminations on what it means to be free. Even Ehrenreich and Glover swerve wildly between trying to imitate their respective predecessors and just bringing some life to the character. Weirdly, Ehrenreich is at his best when imitating Ford, while Glover's attempts to hew too closely to Williams' distinctive cadence distract from his easy charm.

Solo is at its best when it keeps to the basics, and does them subtly. Of course, this is about how he met Chewbacca, and won the Falcon in a game of sabbac from Lando, and even how he got his iconic blaster. And at least now we know for sure what the Kessel Run is.