Being a teenager in a small town sucks. Being a teenager who is exiled and hunted by all, convinced of your own unstoppable proclivity for evil, is a curse. Adapted by Vázquez (with Rivero's assistance) from his own graphic novel Psiconautas, Birdboy is a magical and melancholic examination of what it means to be an outsider – just told with hand-animated animals.

The title character of this melancholic, Goya-winning fable is, like most residents of this strange island, a human/animal hybrid: Some are chimeras, some wear animal suits, some are animals treated as and acting like they are human. Each of them carries their demons with them, suppressing them through isolation or drugs, or indulging them like their worst instincts. Birdboy's may be the worst of them all, a seeming contradiction for this kindhearted soul who communicates only through soft hoots. Yet demons here are not euphemistic. Shadowy spirits haunt each, shaped by their own worst instincts, and Birdboy fears the giant, sharp-beaked, fire-spewing monster that he knows lurks inside.

Vázquez and Rivero find a fusion of the romanticism of Miyazaki, the mordant optimism of Don Bluth, and (rather unexpectedly) the visual accessibility of Richard Scarry, all held together with both visual and narrative nods to the king of vertiginous Gothic, Edward Gorey. It's a bleak and desperate place, made even more terrifying by Birdboy's coke-fueled nightmares, but he is often at the periphery of his own story. The true protagonist is his erstwhile girlfriend Dinki (Alzuri), a mouse from a fractured home, who has an underhanded plan to get every last pure heart (of which there are few) away from the island. Others, like drug-dealing fisher-pig Zacarías (Goiri) are too caught in their own plight to even contemplate escape.

Enthralling and effortlessly relevant, Birdboy is a searing contemporary fantasy, and often unrelenting in its savage attacks on greed, acquisitiveness, the disposable society, and some not-so-subtle jabs at Spanish Catholicism. Yet, for all that brutality, and the continual sense that these children face overwhelming odds from a cruel world, there is a heartfelt sense of hope, that a better world may be reachable. There are no Disney happy ends here, but there is a less bleak future, if only we can look beyond our own blackened, monstrous hearts. 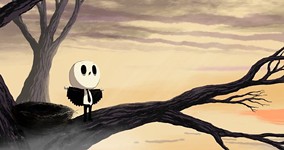