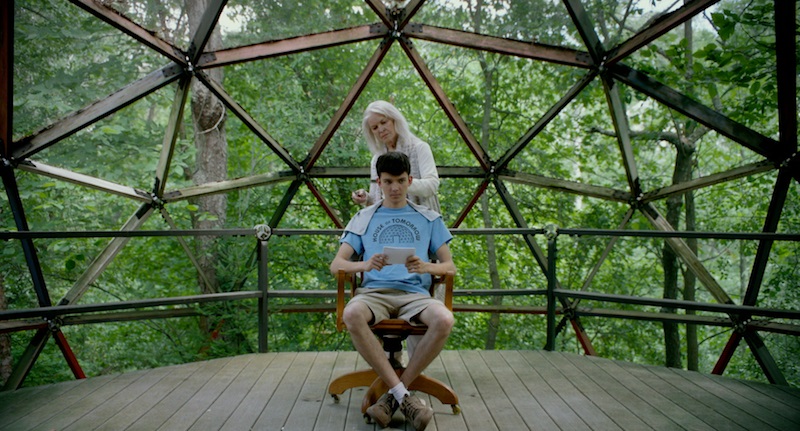 The House of Tomorrow

”I want you to teach me about punk rock,” cloistered teen Sebastian Prendergast (Butterfield) tells his new – and only – friend Jared (Wolff). They’re not even really pals at this point, actually, more like orbiting outsiders who recognize a kindred creative spirit, and decided to tentatively tooth-and-claw their way out of two very unlikely, adult-imposed worlds. They make for one helluva odd couple. Sebastian, an orphan, has been raised in one of Buckminster Fuller’s famed geodesic domiciles by his Nana (Burstyn), who has kept him on a very tight leash indeed. Jared, on the other hand, is the blue-haired, punk rock son of the local Lutheran community leader (Offerman, playing it very straight): The young rebel, as it turns out, recently had a heart transplant. As Sebastian emerges from his ever hovering grandmother’s home into the light of day, Jared just wants to live a normal, punk rock life, if his ticker doesn’t go out on him, that is. (In a smart riff on the typical meet-cute setup, Jared blows Sebastian’s mind by playing him Los Angeles first-wavers the Germs on his iPod.) The two decide to form a band, of course they do, but will they name it Punkminster Fuller? So much at stake, and only two weeks before the big church talent show, too! Time to steal a bass guitar from the church basement and nail down those infamous three-chords-and-the-truth.

If that sounds cloyingly twee to you, it’s not the fault of the cast, who are uniformly excellent. A new Ellen Burstyn film is almost always a good thing, and the pairing of Butterfield (Miss Peregrine’s Home for Peculiar Children) and Wolff (My Friend Dahmer) is. Kudos to the set designer who managed to plaster Jared’s bedroom door with myriad punk band stickers, including Austin’s legendary Big Boys. The soundtrack rules, too, but The House of Tomorrow, adapted from the novel by Peter Bognanni, simply has too much heart for its own good. More growl and less obvious teenage rebellion, please. Between the thematic references to Fuller, which are all over the place, and the cacophonous, crank-it-up-to-11 and then stand up and cheer cliches, this ends up playing like SoCal stalwarts the Adolescents by way of yesterday’s ABC Afterschool Special. It’s so amiably predictable that you end up wanting to throw some Motörhead at it, just to see what happens. 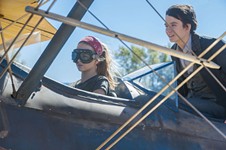