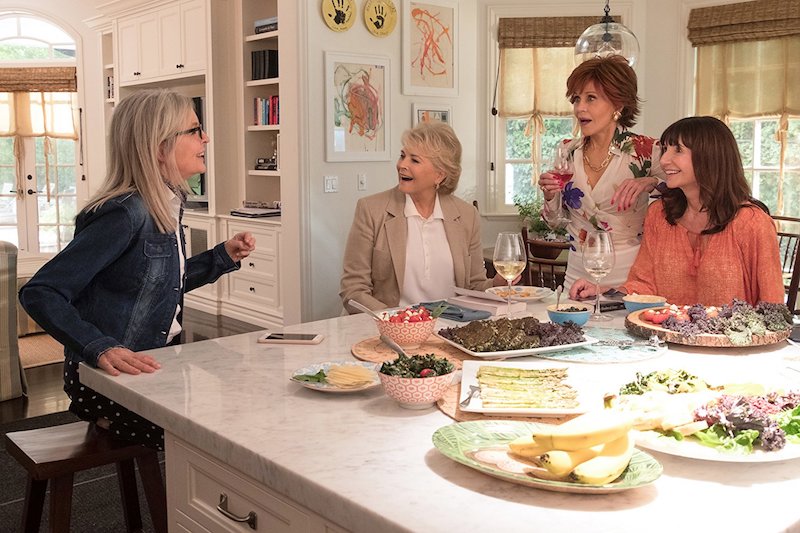 Book Club isn’t a movie for me. It’s probably not a movie for you, either. Book Club was written for an audience that will find loaded references to 50 Shades of Grey delightfully risqué. It will resonate with people who remember first hand the career evolution of its stars and bring that perspective into the theatre. At the film’s best, Book Club places its target demographic within the type of ensemble romantic comedy roles typically reserved for actors decades their junior. Some will love it. Others? Well, they probably won't watch the damn thing, so who cares what they think?

For decades, four friends have come together to read books and trade insights into each others’ lives. Diane (Keaton) is a widow who is struggling to maintain her independence in the eyes of her overbearing children. Vivian (Fonda) is a hotel tycoon who has foregone intimacy for decades of casual sex. Meanwhile, Carol (Steenburgen) is struggling to re-establish her own sex life with her retired husband (Nelson), while Sharon (Bergen) is jolted out of her comfort zone by the news that her ex-husband (Begley Jr.) is engaged to someone several decades his junior. When the group agrees to try E. L. James' infamous novel as its next read, each member is inspired to embrace life in unique – and fairly predictable – ways.

Nothing that happens in Book Club will come as a surprise to lifelong fans of the genre. Closed-off characters learn to open their hearts to love, old flames resurface, and second chances are issued to jilted lovers. We’re presented with typical comedy bits updated for the septuagenarian crowd, such as one character struggling to acclimate to online dating or another discovering the dangers of too much Viagra on date night. Whenever the book club members are off pursuing their individual personal blisses, the laughs are of the paint-by-numbers variety, and it is only the good cheer of the performers that keeps the jokes from missing the mark entirely.

And yet, given the sheer embarrassment of talent on display, Book Club works just as often as it doesn't. Given the quartet of big performers at the film's center, it's refreshing to see that each stock persona fits nicely within the dynamic of the group. Several romantic subplots even sparkle onscreen. Keaton’s still-nervous energy as an actress is a perfect match for the languid charm of Andy Garcia; Bergen’s period of sexual self-discovery leads her right into the waiting arms of all-too-welcome actors like Dreyfuss and Shawn. What could’ve been a lazy callback to Hollywood heartthrobs in their prime becomes a more engaging exploration of sex and dating within the 70-plus set. Ultimately, that makes Book Club a totally acceptable – albeit totally disposable – bit of Hollywood fun.

Poms
Because even Oscar-winners must make cheerleading comedies