Can anyone recommend a company that sterilizes laptop keyboards? I only ask because mine is spotty with coagulating blood. Then again I suppose that’s what happens when you gnaw all 10 fingernails down to the brittle, white bone without even realizing that you’re doing it.

Blame it on Revenge, the ferociously subversive and trippily beautiful debut feature from director and screenwriter Coralie Fargeat. Her film falls squarely within the “rape/revenge” genre, represented in the past by Abel Ferrara’s Ms. 45, Wes Craven’s The Last House on the Left, Gaspar Noé’s Irréversible, and the grotty grindhouse “classic” I Spit on Your Grave, but also aligns itself with the “new French extremity” movement defined by Martyrs and Frontier(s). The difference here is that it’s a female writer/director who manages to both subvert this mostly male-dominated (and oftentimes queasy) genre while still hitting all the familiar tropes. Revenge couldn’t have arrived in the U.S. at a more opportune time, either. It’s the horror film our #MeToo vs. entitled-white-male-“grab ‘em by the pussy” and/or Golden State Killer zeitgeist deserves.

Fargeat’s none-too-secret weapon is Matilda Anna Ingrid Lutz (Rings). As Jen, the paramour-cum-plaything to Janssens’ philandering Richard, our first glimpse of her is enough to make Humbert Humbert squirm. All dolled up in oversize sunglasses, microskirt, sultry blond ‘do, and sucking the bejesus out of a lollipop, Jen appears to be the very essence of the predatory male gaze. As it is, they’ve just helicoptered into the wilderness, or rather an ultra-luxurious single-story villa completely surrounded by the desert, so that Richard can go hunting with his buddies Stan (Colombe) and Dimitri (Bouchède). After a night of hardcore partying and an impromptu lap dance, during which Fargeat celebrates a woman’s right to be as sexy and sensual as she damn well pleases even as the wolves that surround her are all but tripping over their drooly tongues, Revenge takes an abrupt, if foreseeable, turn for the darker side of mankind the morning after. Not Much of a Spoiler Alert: Jen is raped by Stan while Richard’s away and as the porcine Dimitri cranks up the F1 race coverage on the television to drown out all that horrifying screaming. Upon Richard’s return, Jen’s immediate future promptly goes from post-traumatic to pre-decedent. I’ll say no more about the storyline; the film is titled Revenge, after all.

This is a film about a horrific act of violence that eventually results in more bloodshed and gruesomely realistic, Cronenbergian body horror than anything I’ve seen in a long time. Fargeat’s feminist cri de coeur argues, rightfully, that just because a woman looks delicious doesn’t give a man the right to devour her. This is underlined by the fact that the objectification of Jen by the men continues even after they leave the screen, by the camera eye itself. You could argue that Fargeat, working with eye-poppingly sublime cinematographer Robrecht Heyvaert, trains her eye on Lutz’s nearly nude derriere throughout the entirety of the film, and you would not be wrong. Equal parts feminist empowerment manifesto and raging red Grand Guignol heart-stopper, Revenge is, in the end, a dish best served up with cold blue steel and righteous rivers of sauce au sang.

For an interview with Fargeat, read "Coralie Fargeat Gets Revenge on the Male Gaze," May 11. 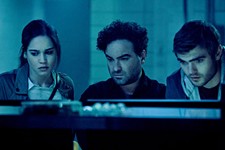